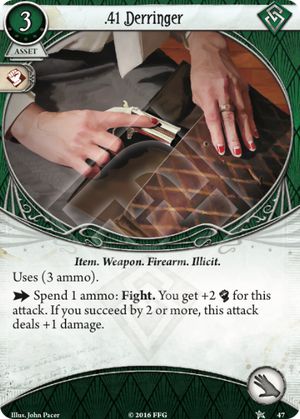 The other competition for weaker investigators is the Fire Axe. It's cheaper to play, reusable, and it can reliably do extra damage (if you can afford to spend all your resources) - but if you factor in the cost of increasing your combat, it actually becomes more expensive for x3 +2 attacks. Although I see a lot of decks sporting Fire axes, for support investigators, I think that the case for it over the .41 Derringer isn't as clear cut as it might appear.

And Baseball Bat, while lovely, does take up both hands, and I find reliably breaks at the most inopportune moments.

To be honest, I came across this while using the .41 as a filler weapon for Jenny Barnes, while waiting for her Jenny's Twin .45s to come out. Clearly, they are better, but the .41 wasn't bad.

A cool "function" of this gun is that when shooting an enemy engaging with other to swiftly free up that investigator and you are boosting for 2 damages, or trying to finish off 1 HP enemy with high accuracy, if the bag hands you high minus or , the +1 became automatically inactive on the friendly-fire damage. A Rogue looking to play to the strength of this gun should just shoot it instead of Engage first like a Guardian with extra damage weapon.