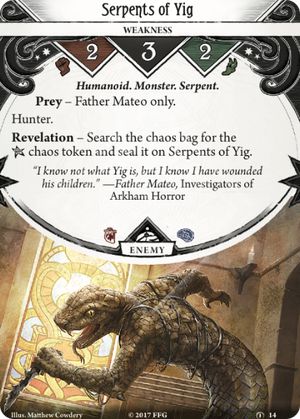 At level 0, Father Mateo now has access to Spectral Razor, which will put him up 6 to 2, which should be good on most campaigns on Standard, and will do the 3 damage necessary to take care of this on one action. And since you have a built-in way to deal with the Auto-Fail token, these snakes aren't so difficult to deal with. 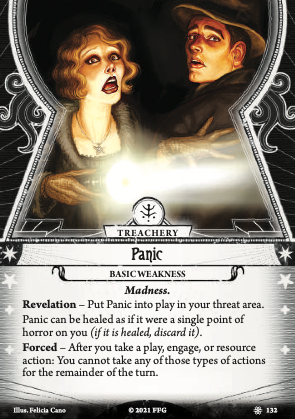 Is... Is that Taylor Swift in the art?

As much as I like Panic, Stupor, and Arm/Leg Injury from a mechanics perspective, they feel both flavorful and balanced, I feel like running an all soak no healing style deck hamstrings anyone that happens to pull one of these as a random weakness.

Barring something like Doomed or Offer You Cannot Refuse or maybe Through the Gates hitting something important, I feel like most basic weaknesses can be dealt with by anyone... even if it's devastating to the bearer (like Drawing the Sign with Harvey Walters or Paranoia in a big money deck). Harvey probably isn't happy to see Drawing the Sign pop out, but he can still toss it and move on rebuilding his hand. But if you happen to be running someone like Tommy Muldoon relying almost entirely on asset soak instead of healing getting one of these weaknesses cripples you from the moment you draw it to the end of that scenario. In my opinion how you feel about these weaknesses entirely depends on what kind of deck you're playing when you get them. Getting Panic or Stupor in a Carolyn deck probably doesn't bother you (I assume that since you can heal it as if it was horror it would still trigger her ability) as you can just treat it as "Miss a draw, take 1 fake horror, and maybe have to restructure your next turn or two if you're unlucky" but a soak heavy no healing Tommy deck likely has to pick up a new card to compensate for the newfound gaping wound in their arm, leg, or psyche.

Thematically these weaknesses are very flavorful and mechanically interesting, I just wouldn't want to be stuck in the middle of the Antarctic without a Medical Student or First Aid kit. Peter Sylvestre and Jessica Hyde just have to sit there and watch you bleed and panic since the "horror" or "damage" is on you, not them.

NorainJS · 17
I think it depends on the weakness and your job. A cluer with mag class probably won’t care about arm injury, as he neither attacks nor activates something. But for a fighter this is a big problem — Django · 3735 10/21/21 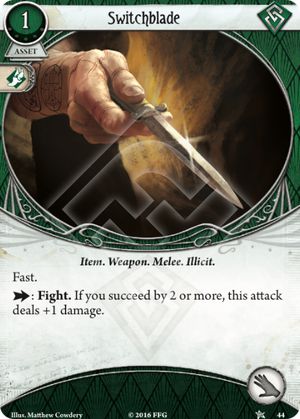 As others have noted, weapons that don't give you a strength boost, allow you to use another stat for the Fight action, or some other jankery are pretty weak. This cards low cost and Fast play action are of limited saving grace.

Unless, you have an Investigator that doesn't need the strength boost. Enter Tony Morgan. With a base 5 combat, starting Tony Morgan is well-equipped to smash things with Switchblade. Add in Opportunist and you have a cheap way to mash up some enemies.

Still not amazing, but Tony provides at least a solid place for Switchblade to be useful in a starting deck, especially if you're looking to fill out his asset slots with 1-2 additional weapons.

AdamMal4444 · 2
He’s probably the best with it, but Id still recommend Knucleduster over this for him. — Death by Chocolate · 946 10/20/21
Knight of swords as a first upgrade make both switchblade and opportunist amazing in tony, without it knuckledusters is probably the pick. — Zerogrim · 214 10/21/21
I also like it a lot in Wini pending its upgrade. With a couple skills cards piled on each test, she's usually killing 3 health enemies in two shots and probably just evading any non-hunters anyway. Spending an action upfront for the greater reliability of Knuckleduster is reasonable, though. — housh · 117 10/21/21

I have done this scenario....what... a dozen times, and I always have a blast with it. So many different ways of ending the game, the way each mechanic crosses in a different way. It's also a lot easier to beat compare to the other standalones, plus you can earn your exp back and more easy. I,therefore, and surprised that no one has made a review on this card. I'll take a Crack at it.

You have to be a pretty convincing Liar, or have a ton of evidence to prove your innocence, to have him on your side. Once he's on your side tho, he will be a blessing, dealing damage as good as taking it. You will probably be taking a weakness, which it's not the worst, but pretty annoying, like most weakness are.

Please note that while I'll list some stuff, he rocks the banner of a neutral card.(as do all standalone assets) so anybody can take him. There are some ouchy stuff to address before I dig deeper.

Those are alll the biggest downsizes I can see, but let's see what he is good at.

The above points are fine, If you can handle the slot, drawing him, and paying for him. He will preform.

Guardian- They are usually fighting, which means engaging enemies and taking damage(and horror) he can do both of these things for you, with cards like trusted and the star , this will keep him alive longer, and emergency aid to heal damage and first aid(lvl 3) to heal horror.

Seekers- they are the best at drawing cards and searching the decks, you can draw him, put him down and not have to worry about enemies bothering you. Seekers can also help get sgt. Monroe out for other players.

Rogues- which class can pay for every card? That's right. Rogues have ways of paying for everything and Sgt Monroe is no exception. They also dip into fighting rolls so it will help them in the Frontline.

Survivors- The tanking/damaging bit is nice, but they are usually a poor class, but that's what a chance encounter is for. Fighting classes should always consider.

Mystic- Same as Survivors, they are a poor class, spending mostly on spells, and events. But they are still considered general support class, so you can for sure use it here.

That's about all the general uses I can think of, but let's talk per investigator real quick, I'll won't name everyone mind, but a few that stand out. I can really only think of guardians at the moment.

Tommy- My man can recur this bad boy all the time,but he might want more exp required friends.

Leo- he makes him cheaper, and a free action to play. Pretty good.

Mark- pretty decent, since he wants tanking for his poor sanity and Sophie. Pretty decent card draw at that.

Zoey- with her engaging everything that moves. She can afford it, and be queen of testless Damage.

Daniela - if enemies attack her, she can put damage on him and Trigger her ability for a bunch of extra damage.

That's about it. :) pretty neat asset.

ps you can commit him for nice icons

Therealestize · 7
You can deal 6 before he dies (not 4). The ability triggers ‘when’ damage/horror is dealt (not after), so it occurs before all of the consequences of being dealt damage and horror, including being defeated. — Death by Chocolate · 946 10/20/21 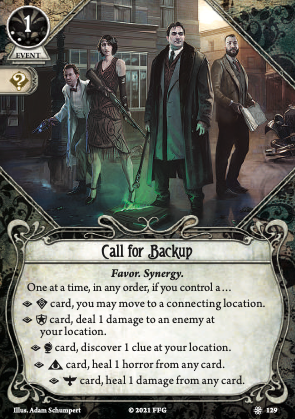 An extra synergy card so that the payoffs for those cards aren't simply two copies of a one-use event (or asset or skill). Instead, it's two copies of two events.

At maximum capacity, it's a solid enough event. Move, deal one damage, pick up a clue and heal 1 damage and horror from any card is very solid. But it takes a lot to get there, and though it's the expansion of multiclass cards, it's still pretty hard to find a way to enable every class with useful multiclass cards. Add in team-play and cards like Teamwork and Black Market and it gets a fair bit easier, but it's still hard to plan around completely, and takes a while to ramp up.

Over all, I think you mostly want to run this card if you have access to either multiple good synergy cards due to a subclass, if you already have reasons to be running the tri-class cards, or if you synergise with the effects on the card. Ursula with any rogue card in play can get a free clue and an investigate, and pop some easy healing in for good measure if you build for it. Trish Scarborough will always see this card as a move, then pick up either two clues or evade an enemy for free, as long as you included Shrewd Analysis in your deck at no cost. That's probably good enough without tacking on some healing or damage. Nathaniel Cho sees one damage as two, which makes it a bit punchier. His limited deckbuilding means he can struggle to max it out, but he also very much likes Gang Up, so there's a reason to try and make it work. Carolyn Fern pays the effect back and has a lot of ways of getting multiple classes into play, and can take Close the Circle, Gang Up and Join the Caravan. Having a method of healing from a distance is nice, too.

SSW · 128
I disagree that Cho like Gang Up at all. It is a Fight event with the spirit trait, but that is all it has going for it. As a mono class ‘gator Cho is already the worst at achieving synergy, and there are VERY few multiclass guardian assets that work with his playstyle. The bonus Combat is rarely useful to him, and the bonus damage is very rarely going to be worth the xp, resources, and set-up compared to Monster Hunter, One-Two Punch, and many other options. — Death by Chocolate · 946 10/19/21
I'd agree if the tri-class cards didn't exist, but Prophetic is already very good for Cho, giving bonuses for the free events that don't boost fight like Monster Slayer, and paying for the expensive ones that do give boosts. And that alone, once in play, gets Gang Up to a 5 damage event for 1 exp. — SSW · 128 10/19/21