Stick to the Plan

Before you draw your opening hand: Search your deck for up to 3 different Tactic and/or Supply events, and attach them to Stick to the Plan. Shuffle your deck. 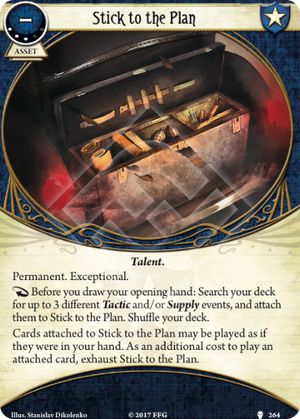 Here's a handy link to a search of all the plans that can be stuck with: arkhamdb.com

Enjoy your plans. Plans are good. Plans are nice. I like plans. Am I over 200 characters yet?

One extra cool thing about Stick to the Plan that nobody else seems to be mentioning here:

For Roland Banks, Zoey Samaras and Carolyn Fern - you can include one copy of Astounding Revelation in your deck. This will trigger when you do your initial search with Stick to the Plan, causing you to consistently start every scenario with 2 extra resources (and your deck is thinned by one extra card!). This is equivalent to having Another Day, Another Dollar, for free!

snacc · 417
That's fair. It is discussed in a few Astounding Revelations reviews, but none on Stick to the Plan. I'm a big fan of using Zoey's 5 flex slots on 2x Rook and 3x Astounding Revelation, especially with how strong her signature asset is and the value of improving the consistancy of finding it. But 1x splashes of Surprised Rabbi is just very powerful with Stick to the Plan for those who can take it. It might even be worth considering Versatile as a budget Another Day Another Dollar if you don't mind adding the other four cards to your deck. (trading resource consistancy for card consistancy) — Death by Chocolate · 789 8/7/20
I'm assuming that this also means Stick to the Plan cannot have duplicates of any card under it? Just thought I'd ask since I didn't see it clarified elsewhere. — LaRoix · 1468 8/7/20
STTP says "different" events so you can't stick the same card twice. — Django · 3557 8/8/20
Don't forget the lovely Lola Hayes! — Redwardian · 7 1/22/21
@Redwardian Lola can't use Stick to the Plan at all - by the time when the reaction would trigger, she isn't in any role at all but her limitations are already active. And even if she could somehow choose the guardian role in time and trigger the reaction, she couldn't then trigger the Astounding reaction due to not being a seeker. — TheNameWasTaken · 3 1/28/21
8

Like most Permanents, Stick to the Plan is really good. It basically says you start the game with three extra good cards in your hand. What's more, you can choose cards to let you consistently execute specific strategies. Here are some possibilities for our three Guardians (not all of these cards are legal for all of them):

Prepared for the Worst: If you put this under Stick to the Plan, you're vastly reducing the chance you'll be stuck without a weapon.

Emergency Cache, Ever Vigilant: These cards are very powerful on turn 1 as they let you set up far faster. Now you can start with one (or both) every game. Ever Vigilant, in particular, is a gamechanger for asset-heavy Guardian decks. Guardians have (except for Zoey) hitherto struggled to pay for all their powerful, expensive assets; with Stick to the Plan I think those struggles are mostly a thing of the past.

Extra Ammunition: Starting with this is a huge boon to any investigator who's running a Lightning Gun or Shotgun deck, since it basically doubles the power of those (already very powerful) cards. Goes well with the two options above, since Prepared for the Worst will help you find your gun and an economy card will help you afford it. Then you can load it up. Zoey could even take Contraband for even more ammo, theoretically. You can fetch the upcoming "Eat lead!" to complement your Extra Ammunition, too, if you want.

Elusive, Dynamite Blast: These are really powerful but slightly situational events, and they're pretty nice things to have in your back pocket. If you have foreknowledge of the scenario, you might know in advance if one of them is going to be needed.

6 XP is a lot, but I think this card offers so much power and consistency to a deck that most Guardians will want to pick it up sooner rather than later.

CaiusDrewart · 2402
Not sure how to report it, but the card is incorrectly showing up in the deck and counting towards deck size, despite it being a permanent. Also, due to timing, it doesn't look like Lola could trigger this since she won't be in any role at the time this would trigger. — slothgodfather · 7 2/22/18
Note that Stick to the Plan exhausts to use one of the hosted cards, so you cannot Emergency Cache + Ever Vigilant turn 1. — Barif · 2 2/27/18
You can do Emergency Cache plus Ever Vigilant if you buy 2 copies of Stick to the Plan and attach those cards to different copies. — timzania · 4 2/27/18
You cannot bui 2 copies of Stick to The Plan because it's an Exceptionnal Card ! Only one by deck per the Rule — halrik · 1 2/28/18
Good write-up. Thank you for listing the cards it can fetch. — Ohnomycoco · 2 3/25/18
Now thats a darn good plan! Zoey with her plan. Lighting gun + ammo + contraband. 12 ammo of pure UNLIMITED POWER! — Euruzilys · 11 5/19/18
5

One of the absolute best things Tommy can stick to the plan at the moment is a flare.

If you manage to flare an agency backup into play early, you are set for quite some time.

But with enough targets in your deck, you aren't going to be disappointed to flare into play a beatcop or brother xavier.

Re: Lola and this card, confirmed from Fantasy Flight rules enquiries: "...though Lola technically has access to Stick to the Plan, at the time its ability would be triggered, she has not yet chosen a starting role and therefore cannot trigger the ability on Stick to the Plan (rendering it rather useless for her). Matthew Newman."

Cluny · 46
It is possible to add two copies of the same card? For ex. 2 copies of shortcut and 1 of elusive. — alberttrombone · 3 3/4/20
Yea that’s my question too. Stick two Emergency Cache or two Prepared for the worst certainly changes whether or not I’ll shelve out the exp for it. Ideally, you’ll have 3 cards in mind to attach to it every scenario, although I suppose I could see myself changing it up depending upon the scenario. — LaRoix · 1468 5/22/20
No, it says 3 different - so all three must have different card names. — Death by Chocolate · 789 8/7/20
1

If Mandy Thompson is teamed up with a Guardian investigator, would that investigator get to draw 4 cards to put under Stick to the Plan? Edit: I have found out. At the time when you draw your opening hands, you haven’t yet read or set up the scenario so aren’t yet at a location. I think.