Fast. Play only during your turn.

Attach to an Item asset you control. Limit 1 per asset.

After attached asset is discarded: Return it to its owner's hand, along with each other Upgrade attachment that was attached to it. 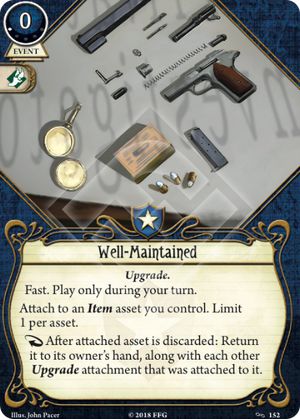 Well-Maintained is a card multiplier, it's power is strictly dependent on the card you apply it to so evaluating Well-Maintained in vacuum is HARD. Even so, here are some notes to keep in mind:

The most immediate way to read Well-Maintained is to assume it's meant for a big gun, but there are lots of cards that operate far more smoothly within the bounds of the wording. For example:

There are lots of items that don't discard but still work good with Well-Maintained, it just requires an extra step to execute on, to recurse an empty gun you need to play something else over it in the slot, for example a Flashlight or another copy of the gun, this is still a rather slow process so I wouldn't pick Well-Maintained for this purpose exclusively, Extra Ammunition is a much better option for reloading guns! But, when you have some of the other cards mentioned above, and/or one or both of the upgrade cards, Well-Maintained becomes a much more impressive addition.

Finally there's a couple more combos that are absolutely worth your attention:

While this card can be used by guardians as insurance against item destruction on their expensive weapons (lightning gun, timeworn brand), paying the cost of 4 or 5 resources to replay the item could still be problematic ('act of desperation' could mitigate this by giving you resources equal to the item's cost after a successful attack).

11zxcvb11 · 3
In addition, while Sleight of Hand + Act of Desperation is already a popular combo. Consider adding Well-maintained. Now that's a pretty big combo (4 cards, counting the high cost item you want to use), but that's some effect. — Phelpsb83 · 165 4/12/19