Ace in the Hole

Exceptional. Fast. Play only during your turn.

You may take an additional 3 actions this turn.

This card gains: “Max once per round.” 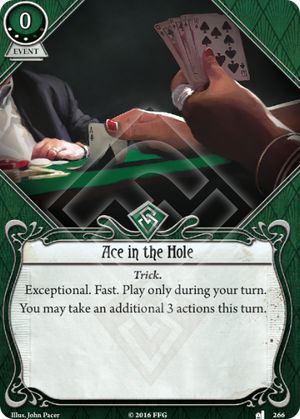 It's very hard to not justify +3 actions for 0 cost. The only thing I can really mention is that it's better to get this upgrade at the end of a core build rather then to start with, you really want some good cards in play to capitalize on so get those upgrades before Ace in the Hole.

Tsuruki23 · 2205
I’ve actually cooled on this card a lot. If Im playing multiplayer Id much rather save up 2 more XP and buy Gold Pocket Watch. Otherwise 6 XP should just be spent on several other cards to make your deck more consistently powerful. — StyxTBeuford · 12690 9/14/19
I agree that the Gold Pocket Watch is realy awesome in Multiplayer. I just want to mention, that Finn Edwards cant take the watch, but can get a lot done with Ace in the Hole. — Shinkatsukyu · 8 9/16/19
Ace in the Hole also combos with Pay Day, while I don't think Gold Pocket Watch would. — Zinjanthropus · 199 5/25/20
Also, Ace in the Hole doesn't seem to get removed from the game after using it, so you can theoretically cycle your deck and see it multiple times (though I don't know if that's likely with any Rogues other than Winifred). — Zinjanthropus · 199 5/26/20
Oh wait, All In is a thing, nvm, Rogues can totally cycle their decks. — Zinjanthropus · 199 5/26/20
In case anybody is wondering, this card is bonkers powerful in Winifred. You can probably see it like 3-4 times in a scenario, and it helps you make use of excess cards that would otherwise be discarded if you used All In earlier. — Zinjanthropus · 199 7/25/20
3

Note that the taboo'd version now adds "Max once per round." to this card if you're playing with those.

Hard to argue against a card that gives you a free turn and doesn't cost an action itself by being Fast.

This combines well with Quick Thinking and Pay Day to produce a seven action turn, six of which are free to use for anything with one to action Pay Day's payout of 7 resources. For a Finn Edwards deck with his free evade, you can get eight actions into a turn: six again for anything, one for an evade, one to collect 8 resources. As well as a free turn, gathering up that many resources is a great boost early on. You can also use this without Pay Day during the endgame to rush to that finishing location in a single turn.

dehora · 149
The main issue with this card isn't so much the effect isn't good. It is that rogue tends to need more ways to get impact and consistency from its actions rather than more actions just due to how the class functions. That and 'action spam synergy' tends to not be great. Bonkers in Tony though! — dezzmont · 110 3/28/22
It is still great for Rita Young who can take this for the Trick trait. As a survivor, she usually has XP to spend. Plus a great synergy with survivor shenanigans like Will to Survive and Trial by Fire — Trady · 103 3/29/22