Revelation - Draw the top card of the encounter deck. That card gains surge.

"Don't worry, I have this completely under control!"
David Auden Nash
The Path to Carcosa #40. 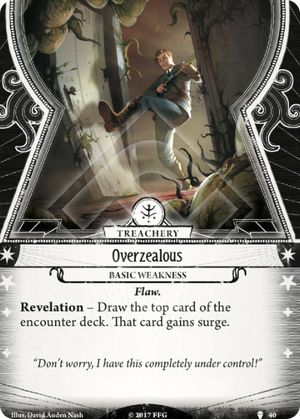 On my private list of "Horrible things that Cthulhu did to mankind" there's Black Plague in the number one spot, but then there's this card in close second place.

Encounter cards are like Twinkies: sure it might be thrilling to have one once in a while, but eat too many at once and boy, you know you're in trouble. Having to draw one encounter card per round is the norm. If you are a mystic at heart you have cards like Drawn to the Flame that gives you 2 clues for your trouble, or Delve Too Deep to gain that precious XP. Basic Weaknesses obviously lie in different category than regular player cards, but I want to sketch out the idea of how much enounter cards are worth in terms of gain, so that, by analogy, we can try to understand how much you lose if you draw a bunch of them - which will happen at some point, if you find yourself mildly Overzealous.

All Basic Weaknesses (excluding obvious Indebted) deny you draw of one card and additionally put on you some kind of penalty: some of these penalties are immediate (like Amnesia) other give you time to deal with them, before they start to become the problem (for example Psychosis or Chronophobia). (Additionally, that shows the standard of how much inconvinience average Basic Weakess should provide: aproximately loss of two actions - assuming you don't want to suffer consequences.) Obviously the immediate ones tend to be worse, mainly because you have no control over them, they don't offer you any substantial choices. Overzealous, sadly, belongs to the first group, but the worst part is yet to come.

Now, let's see what happens, when you draw Overzealous during your upkeep:

One might say: "Bah, of course it's gonna be different! Tis the Arkham, you fool!" - and on that note I agree, but it's all about the scope. You expect to get hit by something, or to be engaged with one enemy at the start of your next turn... But what about having three enemies on you, or having just one, but being severely damaged due to failed skill checks? Or pulling a bunch of Acolytes and learing that whoops! - agenda is going to advance two rounds earlier...? That's a different beast entirely. Additionally, this card, unlike other Basic Weaknesses, scales with the scenario you're playing, meaning that the harder the scenario is (or the later in the campaign you are), the worse Overzealous gets. Drawing this one card, like no other Basic Weakness, might be the end of the road for you, just by the fact of how little control you have over it and how far it can set you back, compared to other Basic Weaknesses.

Are there any good news? There are! In multiplayer it's much easier to deal with the encounter cards with staying effects (mainly enemies), as your friends can always help and taunt them off you. Another good news is that if the first encounter card drawn from the revelation effect already has surge, that card cannot gain additional surge! Hooray...? Bad news is that if the second card drawn from the surge of first card, has surge, you will chain even more encounter cards. So there's that.

This encounter card is probably the worst weakness for true solo decks, as it will thoroughly test your luck stat - which sadly, you can't boost. However, even in group play there will be times, when you'll draw perfect storm from the encouter deck, and in your powerlessness, you will weep: "Cthulhu, deliver us!" But in return, thou shall only hear chaos tokens, shuffling in the bag of tentacle wonder. And you will repent for not believing this review.

Skid_the_Drifter · 120
I don't understand why this card gives the encounter card surge. I mean if it just gave one encounter card it would still be the worst weakness in the game. — Kamalisk · 231 1/9/18
Uhh no, encounter cards are usually not as bad as personal weaknesses (encounter cards are balanced around a loss of 1 action and personal weaknesses 2 actions) — Difrakt · 1146 1/9/18
I agree that this is usually the worst weakness in the game. It depends a bit on the investigator, and Indebted and Amnesia are also really bad, but this one just has so much potential for disaster. — CaiusDrewart · 2745 1/10/18
It also makes digging through your deck with card draw from cards like Guts, Overpower, etc., extremely dangerous because enemies may have a chance to just simply kill you during the enemy phase if you haven't set up some kind of contingency plan for the worst possible scenario. I imagine I'll be subbing out Overpower for I'll see you in hell, now that I've discovered I have this wonderful card in my deck. — thekinginperiwinkle · 134 4/25/18
On the other hand, if you're a class that can take Ward of Protection or similar, you can use that to cancel any treacheries drawn from this. If you can cancel the first one, you've just negated your basic weakness at the cost of Ward, which I think is a pretty good deal. — SGPrometheus · 658 6/1/18
Whoop, just kidding; surge isn't part of the card's revelation effect; you'd need the level 5 ward to stop this, which is less good. — SGPrometheus · 658 6/8/18
This card is so thematic, but it's the worst. I've literally drawn 6 cards in a row with this card; 1) non-surge with [Overzealous](/card/03040) applied, 2) draws a surge card, 3) another surge card, 4) another surge card, 5) another surge card, 6) it's over, but now I have an enemy to deal with after taking 5 other cards to the face, and then comes my mythos phase encounter draw. Especially if you drew cards that are choose to add doom or eat some horror/damage/discard and you need to take it for the team--I actually died right then and there on turn 2 (had trauma and unluckily got poisoned earlier). — redcrown · 1 1/22/19
This weakness is brutal but there are rare bright spots. 1) If you are treachery resistant drawing into treacherousmight be academic. 2) If you are — Eviltowe · 1 5/25/20
This weakness is brutal but there are rare bright spots which sync into how beautifully thematic it can be. 1) If you are treachery resistant it can wind up being just a loss of a card draw. 2) If you are enemies resistant or desperately want to see enemies like Roland or Zoe it can be useful as it can chain multiple cards to get you one. 3) It can utterly diminish a very powerful and detrimental Mythos card by having it come up in the upkeep phase or the investigator phase as opposed to the Mythos phase. Cards that allow tests at the end of an investigators turn or that go away at the end of a round can be severely weakened or even neutralized by this weakness. 4) There are cornet case scenarios notably in the Dunwich legacy where rapid cycling of the Mythos deck is necessary despite the risk. Jazz Mulligan showing up in Extra Curricular Activities is an example as is getting Locations to appear from the Mythos deck in Lost and Time and Space. I actually won the Dunwich Legacy Campaign because of this card. Thematically being Overzealous is a mixed bag and in my experience the card has helped me once for p every three times it hurt me. Like any weakness the timing of it’s appearance is everything. — Eviltowe · 1 5/25/20
0

The devious nature of this card cant be overstated.

-The "surge" effect is not applied to the revelation effect and is instead applied to the card itself. Therefore, Ward of Protection or radiance wool not cancel the surge.

-The encounter deck, unlike weaknesses, is not standardized. Most weaknesses will net you a loss of two actions. The encounter deck can range from mild inconveniences to game ending debuffs. This card insures you will draw 2, essentially guaranteeing at least 1 will be more detrimental than the standard loss of 2 actions

Not sure if this or doomed is worse.

drjones87 · 65
Nothing Like drawing a cultist plus mysterious chanting right BEFORE the mythos phase. — PowLee · 13 5/10/22
I thought Ward of Protection only cancelled the revelation effect, so Surge would still occur? — Narissya · 1 5/11/22
@Narissya That is correct and what the review is trying to say, but they misspelled 'would' in 'Word of Protection... would not cancel the surge.' — Death by Chocolate · 1203 5/11/22
0

The trick with this admittedly punishing weakness is to pull it early, and ideally early in the turn. Use your card draw skills/events during Mythos or action 1 so that you have some time to deal with the effects of this card. Burn your deck until this is in the discard. It's not about avoidance, it's about acceptance.