"You handle this one!"

Fast. Play after you draw a non-peril encounter card, but before resolving that card's effects.

Choose another investigator. That investigator is considered to have drawn that encounter card instead. Gain 1 resource. 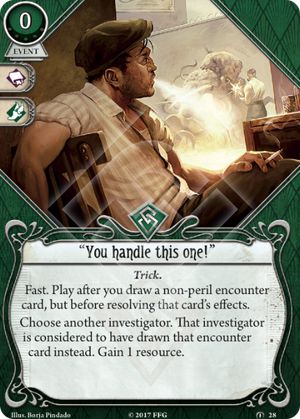 It's no coincidence Finn Edwards shows up in the artwork of this card, as he exemplifies the type of rogue that wants (and needs) this card.

Rogue have notoriously bad , presenting only a single 4 investigator and a single 3 investigator. They also have the only two 1 invesigators in the game, beaten out only by Calvin Wright, who still outshines them with a built in booster.

Rogues are then desperate for ways to withstand the horrors of the encounter deck, and the selection of in-class cards at their disposal to achieve this is... pitiful. Dario El-Amin, Moxie and Tennessee Sour Mash (and it's upgrade) represent the only boosting cards in their arsenal (as of Dream-Eaters), and the first two examples are far too unreliable (the third is an auto-include for some investigators). The only other cards that technically aids in dealing with the encounter deck is Cheat Death, a 5xp sink that won't see much time in any deck as a result.

It's so bad for rogues that THEY DON'T EVEN HAVE A CARD WITH TWO ICONS ON IT, with the not that relevant, technical exceptions of The Gold Pocket Watch and All In. Really, in order to inure a rogue against getting screwed over by the encounter deck, you need to rely on neutral or out-of-class cards that, fortunately, is an option for every rogue character. Still, those are precious card slots getting occupied before any other card can be considered, especially when you're only allowed up to 5 out-of class cards, as Jenny Barnes and Finn Edwards are restricted to.

Thus, I say with confidence that "You handle this one!" is a must-have for all the rogues with 2 or less, and a serious consideration for any 2 or less investigator that can take it. Of course it's efficacy will vary depending on the scenario and campaign, but remains the most tested attribute from revelation effects, and horror remains the most common punishment from treachery cards. And it goes without saying that you don't play this in a one-handed solo campaign, for obvious reasons.

Now, I've ignored its glaring downside until now, namely that someone's footing the bill for your brief respite from the encounter deck, and you may not feel comfortable saddling some poor sod around the table with your problems, especially if the're your friend.

Thing is, in many a case, your fellow investigators will be grateful for you sending treacheries their way, guardians and mystics who've run encounter-hate cards specifically. A guardian will generally be appreciative of the time-saver of having an enemy spawn on them, rather than have to use actions to move/engage an enemy someone else drew. Likewise, a mystic running Ward of Protection will be hoping to be the one to draw Ancient Evils to prevent an entire round's worth of turns being skipped. Having "You handle this one!" can enable their encounter-hate more effectively.

But even without that archetype, having a 4+ investigator in your team is enough to justify taking "You handle this one!", doubly so if said investigator has a high sanity threshold (which is correlated with high ). It is a co-operative game, after all; your well-being directly benefits the group, and no-one wants to see one player struggle turn after turn to discard a Frozen in Fear.

A final word; until more rouge encounter-insurance cards get released, investigators like "Skids" O'Toole and Finn Edwards are going to have to justify not taking "You handle this one!" every campaign. Doesn't matter if it and Tennessee Sour Mash are or aren't good; the fact of the matter is, the're just aren't any other options (or so I claim, I would really like to be proven wrong on this one).

Lucaxiom · 3313
If you’re building your deck with lots of money well connected and money talks also work — Django · 4192 11/1/19
You're forgetting Diana who also has 1 Willpower, though that's admittedly kind of dubious. Funny enough "You handle this one" onto Diana is actually a really strong play. The one thing I think you slightly neglected is that there are alternatives to YHTO in dealing with treacheries for the four investigators in question (Finn, Skids, Tony, Preston), and these alternatives are particularly important since playing any of them solo means YHTO is useless. Skids and Tony can take Steadfast, Take the Initiative, and Delay the Inevitable, which actually go a long way to mitigating the worst treacheries. Tony can also go Seeker and take Logical Reasoning and Inquiring Mind, or Survivor and take Perseverance and later Test of Will and Devil's Luck (which Preston can also do). Survivor Tony, Preston, and Finn can also embrace the failure a little bit with Take Heart, using it on any Will test as a means of gaining back some lost momentum, and Finn in particular really like Peter Sylvestre for the agility boost and horror soak. Finn can also take Logical Reasoning. Finally, all of them can take Sour Mash and Smoking Pipe, the former I like much more on the 2 Will guys than the 1 Will guys. So in every case there are solid alternatives to YHTO that makes it more than feasible to run these boys solo, but in any case I agree that for multiplayer YHTO is a heavy consideration and one of the best mitigation cards they have. I especially like it for Preston who's incredibly limited in doing anything during the Mythos phase. — StyxTBeuford · 12725 11/1/19
Yeah, I agree it's a good card, but I wouldn't go so far as essential. I'm playing Finn in a Return to Carcosa campaign right now without any encounter mitigation whatsoever, and I honestly haven't felt the lack. I tend to think this card ultimately suffers from the problem a lot of "defensive" cards do, which is that the best defence against the encounter deck is to finish the scenario. It's one thing if you're a mystic/Carolyn etc who can mitigate more or less everything, but with the best will in the world (ha) my experience with Rogues are best served not worrying about their limited mitigation options entirely and focusing on compensating for their weakness to the encounter deck with action economy and cluevering speed. So, yeah, I disagree that you need to justify not taking this card as one of the relevant investigators. I honestly think people overestimate how much of an issue low will is :) — bee123 · 24 11/2/19
Eh, a badly timed Rotting Remains will always be an issue. But for Finn at least something like Frozen in Fear isn't that much of a killer, as he has access to extra actions just by being Finn. — StyxTBeuford · 12725 11/2/19
You can't finish the scenario if you are dead and variance is a thing in this game so having defense against the Mythos is always a good idea (Solo and Multiplayer). If you draw for example 2 horror treacheries like Rotting Remains at the start of the scenario and you or your team don't have any mitigation (heal, cancel or skillboost) then you won't have a good time no matter the tempo of your deck/team, I can assure you that lol — Alogon · 849 11/13/19
That all said I really dislike level 0 Sour Mash, especially solo, and I think there’s plenty of better options there for encounter mitigation. — StyxTBeuford · 12725 12/23/19
Also quick note I didn't realize until now: You cannot "You handle this one!" into a Ward of Protection because Ward of Protection is "when" while YHTO is "after", and the timing language of the game places when before after. So the window for Ward is gone when you play YHTO. In other words, hold on to your Ward 2s. — StyxTBeuford · 12725 2/17/20