Scene of the Crime

Play only as your first action.

Discover 1 clue at your location (2 clues instead if there is an enemy at that location). This action does not provoke attacks of opportunity. 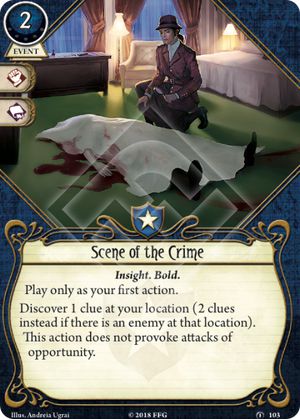 This card is a game changer for guardians. Almost every guardian deck is improved by including this card (especially if they run On the Hunt).

It costs a fair bit, but its effect is profoundly powerful.

Running this card next to on the hunt gives you the ability to really turn up the gas. You draw the enemy (REALLY good odds of it), engage it and now can use your first action to gain two clues at a location.

No test, no attack of opportunity. No nothing.

That is almost a flashlight worth of clues with only one action rather than THREE (play flashlight and investigate twice) AND it dodges investigation restrictions AND attacks of opportunity AND doesn't require a token pull from the bag.

A great card in decks that want to run on the hunt (read as MOST GUARDIANS).

In fact, the only guardian who might not want it right away is some Mark builds which can run Working a Hunch.

Myriad · 1143
Maaan... That card in solo gator's hand and Restricted Hall in Miskatonic Museum... Just say hello to Hunting Horror and take the book just like that. Even you don't need to play with searching a monster to uncage the full potential of that card! Aaaand +1000 points of style for linking both Act 2b flavor texts and Scene of the Crime theme :D Amazing card. — KptMarchewa · 1 6/14/18
Doesn't seem like I can add this to decks yet, but I'm not sure why. — TheUnthinkable · 347 6/22/18
Sometimes I think they use darts to determine the resource cost of events. This should cost 3 or more, Marksmanship (in the same pack) should cost 1 or less. Costing them both at 2 is crazy... — duke_loves_biscuits · 1135 6/26/18
Guardians have enough trouble with resources that I don’t like seeing this be more expensive. I would rather see this as a level 1 or 2 card with the same effect. — Death by Chocolate · 1203 9/27/18
Does this combo with On the Hunt? That is, would On The Hunt be considered a "first action?" I'm thinking no, but would like some backup on that. — crymoricus · 225 1/7/19
On the hunt is fast, so doesn't cost an action — Talex · 1 10/11/19
Does Scene of the Crime work with Diana Stanley's signature ability since it is ignoring a game effect, the attack of opportunity? Seems like it does. — McV0id · 8 4/7/20
To call out one more combo -- Alice Luxley becomes a much better ally if you're running two copies of SOTC. Not only do you swipe two clues from underneath an enemy's nose, but then you punch that enemy in the nose as well! That works out to 2 clues and a damage for an action and two resources. Yum! — Mordenlordgrandison · 376 5/11/20
Does not != Ignore, McV0id. — MrGoldbee · 1265 12/9/20
Not only for guardians, this event combined with I've got a plan! and Deduction (2) means 4+ clues and a 3+ HP monster dead in one turn.. — forever_seeking · 1 1/17/21
Another rules question, can this be played with Parallel Roland's directive to make insight's fast? That would seem to violate "Play only as the first action", since it doesn't take an action right? — TrisJ1 · 1 8/24/22