The Barrier Is Thin

Карти контактів
Загроза. Stage 2
Doom: 5. Clues: –
Ichtaca’s strength continues to wane as you journey through the strange vision. You’ve never seen her this troubled. She is often distracted, peering about as though any moment the answer will appear before her. From time to time, she mutters strange phrases to herself: "…How could this have happened?…The answer will be with the ancients…Someone else is here, I know it…"
Matthew Cowdery
The Boundary Beyond #163. The Boundary Beyond #3. 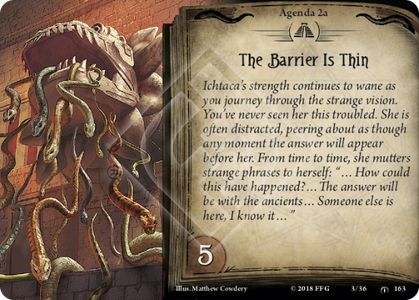 Vision of the Future - Back

Загроза
The silver flashes of lightning become more frequent, and the sky starts to split open. Thunder rumbles in the distance, and you watch as the skylines of both cities - the Present-Day city and its ancient predecessor - are consumed in a giant stone maw. Six pillars surround the cavernous opening, each glowing vibrantly. A red hue erupts from the center of the opening, and the ground shakes with the force of an earthquake. "We've seen enough. We must get out of here while we still can!" Ichtaca shouts. For the first time since meeting her, you hear a telltale trembling in her voice.

Find each Tenochtitlán location in play with no clues on it. Add those locations to the victory display. Then, for each Present-Day location in play, search the exploration deck for a location with a matching location symbol in the upper-left corner and place it on top of that location, taking its place.

Each investigator loses each of his or her clues. 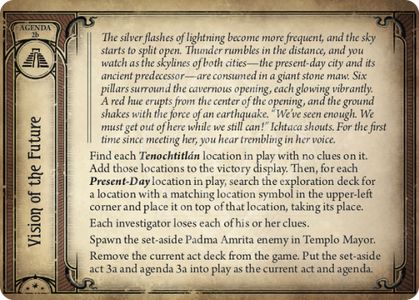