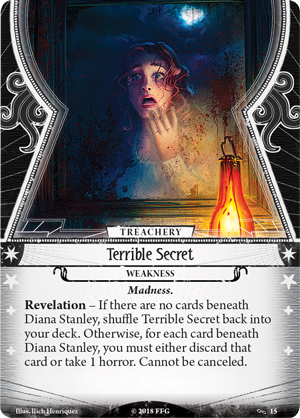 Doesn’t Deny existence only work on encounter cards and enemy attacks? I could be completely misunderstanding part of the interaction or encounter keyword- I’m still learning a lot of the technical side of the game

Skothu · 3
Yes, as Deny Existence states you can only play it on encounter cards. However weakness cards with encounter cardtypes, such as 'Treachery' and 'Enemy' are considered to be encounter cards. You can find it in the glossary under section: 'Weakness'. — Csys · 1 5/26/19
Thanks! I assumed the post was right, finding out why helps a ton with deck building, very much appreciated! — Skothu · 3 5/27/19
To clarify further, weakness cards with encounter cardtypes are considered to be encounter cards AFTER they are drawn. While being drawn, they aren’t encounter cards yet. — Death by Chocolate · 1131 5/27/19
So you can actually use "Deny Existence" to cancel all the Horror caused by "Terrible Secret"???? — Alogon · 837 6/3/19
@Alogon No, but you can use it to IGNORE all the horror caused by it. This is an important distinction because Terrible Secrets is immune to cancel effects, so many cards, such as Delay the Inevitable, can’t be used to stop it. Really, FFG should add an FAQ entry clarifying the rules for ‘ignore’ effects because ‘cancel’ is covered in the rules reference and there has been very little to actually distinguish the difference between them besides this one card. — Death by Chocolate · 1131 6/3/19
I’m going to assume that there will be errata for this card to also prevent its effects from being ignored (Deny Existence). This weakness is a non-factor with Deny Existence and you almost hope to draw it eventually if you have Deny Existence (5) and Horror on you. — carlsonjd11 · 437 8/16/19
0

This is a very situational signature weakness. Looking at the two elements, the effect and the discard condition, we get:

The effect: Diana has to discard cards beneath her (reducing her and invalidating the Twilight Blade and her effect, otherwise, she has to take horror. The latter is somewhat fraught, as Diana is pretty average on Sanity, especially compared to other investigators. This can be bad, if you are playing a Diana who cares about or utterly irrelevant if you aren't. The horror cannot cancelled, but it can still be negated by Deny Existence.

The discard condition: One and done, unless the weakness will have no effect, in which case it gets reshuffled.

LivefromBenefitSt · 887
In general, I would care more about Diana's willpower than her sanity. Although, she has only 5, she doesn't take that much horror from the game with all her other cancel and ignore effects. On the other hand, if you have several cards in your hand to restock her ability, it is easier to let some cards under her go to avoid some horror. And of course, I would always spare a DE for that card, once I'm at 4 or 5 cards below her. This weakness ist most annoying, if you draw it in first upkeep phase and have to reshuffle it in your deck. — Susumu · 211 4/26/21
This can be a great enabler for her ability, if you have 5 cards below her and several counters in hand but didn't get the blade. If your deck is built around fight instead of will this is also less of an issue. — Django · 4140 4/26/21
I confess my experience with Diana has been in non-willpower builds where, if she gets cards under her, that's great, but, if she doesn't, it's not a crisis. — LivefromBenefitSt · 887 4/26/21
I rather focus on her willpower and ability, for two reasons: 1) A 6 willpower mystic is infinite stronger than a 3 combat mystic. 2) She has a deck size of 35. That means, her deck is much more inconsistent, if you don't trigger her ability, that is also a cantrip. But even in willpower-builds, I found her weakness rather easy to come around. In particular after the release of the Jaqueline Starter Deck with "Azur Flame". She can get squishy with "Shrivelling", since you shouldn't forfeit "Arcane Research" either, imho. The horror, that comes from the encounter deck will hurt her only very rarely, if you pack enough cancel and ignore cards for it. — Susumu · 211 4/26/21
I mean, does anyone ever not just Deny Existence this? I honestly think the build doesn’t matter- you want cards under Diana to be able to reuse them with her signature anyway, so there’s no instance I know of where you electively take either side of this card. DE destroys it entirely, might as well save 1 for it. — StyxTBeuford · 12699 4/26/21
Yeah, DE destroys it, and you will normally save a copy for it. (Or a secret on Dayana, if you have her and the level 5 spell.) But even in the circumstance, when both copies are at the bottom of your deck and you don't get them before TS, you can normally handle it easily. — Susumu · 211 4/26/21
Man I don't think I've ever had that happen, but it sounds like a bad time unless the scenario is about to end, in which case sure, dump all the cards and keep moving. — StyxTBeuford · 12699 4/26/21
It's not that bad, because you can choose for each card individually, if you keep it below her or discard it. So you can ponder, based on how much horror you can take or how fast you can recover her willpower with the cards in your hand, how many you let go. — Susumu · 211 4/26/21
Just a quick follow up on Deny Existence. With this weakness, is the discard/horror sequential or all at once? If she has 5 cards under her, do you pick through and say discard 2 and take 3 horror, or do you look at card A, keep, take horror; look at card B, discard; card C, keep, horror, etc? If the latter, wouldn’t deny existence only ignore Horror once? — BroodyGambit · 8 5/18/21
@BroodyGambit It's sequential. This is because of the "for each" text - it instructs you to make a separate decision for each card under her. — snacc · 741 7/19/21