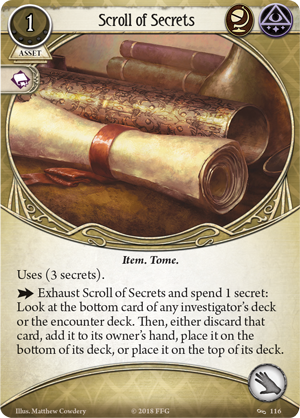 An interesting cheap card that would normally be a good comparison to Scrying. Scrying is already a tool that some people deem worth it and others do not. Certainly when interacting with the encounter deck, Scrying will be more flexible in preparing for what the group (or solo) would be encountering. You can keep delaying something with it or setup everyone for optimal draws in groups. Since the scroll of secrets is only dealing with a card you may never get to, or might want to be left there it might do little to nothing. And once you think the card on the bottom is ok and you would rather deal with it instead of something else. Well, then this card will no longer be useful "in the encounter deck". I think that interaction has little useful circumstance.

You could, if you wanted combo a little bit with Alyssa Graham and get rid of a card that you recently put to the bottom of the deck in the encounter deck, but outside a corner case such as that, it doesn't seem that useful against the encounter deck.

In regards to individuals player decks, I think that Daisy Walker should always be considered whenever we are dealing with a new tome that has been released. Would this be good for her? I think the comparison there would logically be Old Book of Lore. The cost of Scroll of Secrets is much cheaper, but has limited charges and only really examines 1 card at a time. But Daisy Walker would put this out to get a free draw for three turns (unless a treachery is seen, in which case you discard it). It's not a bad card, especially since if you are going with a draw mechanic to fuel Higher Education, you usually put more than Old Book of Lore in there for draw potential. But I think once you get the book out, you won't be using this, as you only get that free draw action between them once per turn. In this case, it seems like a decent include but nothing special.

With regards to Norman Withers, he also has the potential to put that card on the top of his deck in order to get a cheap interaction out of it instead of his hand which can reduce costs of cards over time if the card found was something that is currently playable at the time. So, it can act as a cost reduced draw action in some circumstances.

Overlay, I think it is an ok card that won't see all that much use. If there are other important interactions amongst and that I am missing out on that seem fruitful, please point them out in the comments.

Bronze · 108
In a Daisy deck, scouting your allies's decks for their weakness with Alyssa, then put them on the bottom and discard them with the scroll could be useful! — mogwen · 159 3/19/19
The upgraded version looks to be quite useful for Daisy. The text is cut off, but it looks to be three cards instead of one. — cb42 · 23 3/22/19
If I was playing Daisy and had both Scroll of Secrets and Old Book of Lore in my hand on turn 1, I'd play the Scroll of Secrets. Normally, your assets in play are more at risk from the Encounter deck than your cards in hand, so it's good to have cheap assets out, and you have resources left over to pay for expensive assets like Dr Milan Christopher. Enraptured also extends the lifetime of the card. — Katsue · 8 4/12/19
can it be used in Mandy Thompson? I understood no, but it is available in the deckbuilder — efialto2 · 9 10/5/19