: After an enemy enters play: Move 1-3 bounties from Bounty Contracts to that enemy, to a maximum of that enemy's health.

Forced - After you defeat an enemy with 1 or more bounties on it: Move its bounties to your resource pool, as resources. 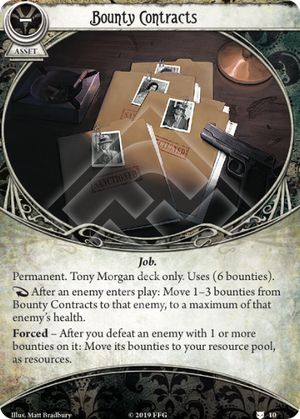 After my first scenario playing as Tony, I've learned something important about this card:

The resources aren't relevant; the actions are.

To put it more plainly, this asset works best if it gives you six (or more) free fight actions over the course of a scenario. In a vacuum we generally equate a resource as being worth an action, which would imply that you want to place as many bounties as possible on one enemy to convert one fight action into several resource actions. However, when an enemy is engaged with you (or even just at your location), a fight action is worth a lot more than a resource action, so the ability to place bounties is more important than placing more than one bounty.

In conclusion, I recommend putting as few bounties on enemies as possible. You're using this for free fight actions, not free resource actions.

SGPrometheus · 635
It’s not an A or B strategy imo. I have several campaigns with Tony under my belt now and I can say that while primarily you want to extend your bounties (by placing 1s often) there is merit to placing 2 or 3 sometimes. Notably your Long Colts get much larger combat boosts with more contracts, and they refund a bounty on kill. The resources early can also be relevant in the first several scenarios of the campaign. — StyxTBeuford · 12690 3/16/20
Getting Asset fast improve your Action efficiency too. — AquaDrehz · 177 3/19/20