During your turn, exhaust Stealth: Evade. The chosen enemy gets -2 evade for this evasion attempt. If you successfully evade the enemy, disengage with it but do not exhaust it. Until the end of your turn, that enemy cannot engage you.

Ignacio Bazán Lazcano
Return to the Path to Carcosa #5. 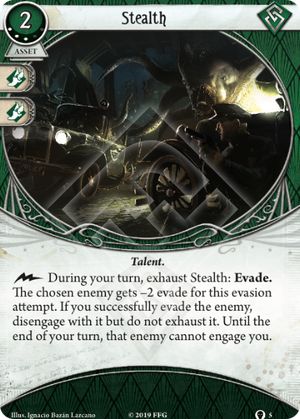 Almost identical to the level 0 version of Stealth, for 3 XP you get an additional Agility icon, and Finn Edward's ability to Evade as a free action once per turn. This is further bolstered by the - 2 evade, making this a solid pickup. 3 XP might seem like a lot, but any enemy with an Agility of 2 or less is automatically evaded, unless you draw the auto-fail. Yet another benefit is that seemingly ever present inclusion of "a non elite enemy.", is missing from the card. This means you potentially can evade some big elites, turn after turn. It can also be used aggressively with Waylay, if the investigator can take it, potentially turning Waylay into a 1 action kill, or with Sneak Attack, for a cool 2 test-free damage. Might be overkill in a Finn deck, but also turns him into a pretty great dodge tank with just a bit of support. I personally think it's a great card, with a lot of potential.

oCCult · 6
It doesn't work with Waylay, though. Waylay requires the enemy to be exhausted and this specifically doesn't exhaust the enemy - it just disengages it from you. It also can't trigger lvl 0 sneak attack. So it's a bit more limited than a free evade action, and I think it's only really great in solo. At higher players counts, you're not so much evading the enemy as you are pushing it off on whatever other investigators happen to be at the location and I think that's a bit less valuable. — bee123 · 24 9/1/19
In Multi it can be helpful for the cluer to move on their own or push enemies to the groups fighter? — Django · 3433 9/3/19
The enemy can't engage you until the end of your turn, if that means the investigation phase (as I would assume), then they can still engage you and attack you during the enemy phase. Makes it less useful, especially for hunter enemies. Still seems pretty good in some cases though (Especially solo) — Zinjanthropus · 160 5/20/20
Also a good way to trigger a slew of succeed-by-two effects — Zinjanthropus · 160 5/31/20
3 exp to have the action of Stealth(0) fast. I already find Stealth(0) weak. I suppose it's better in solo. — Mataza · 15 7/6/20
Not requiring an action is a substantial upgrade — Chitinid · 14 9/7/20