Play only if there is a scenario card with a 'resign' ability in play.

Resign. You get the hell out of here. 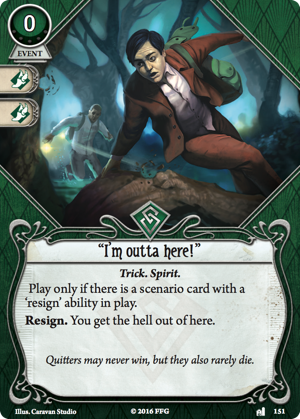 Spoilers for The Dunwich Legacy:

..... In the last scenario Lost in time and space to get best ending you have to resign so you have to spend 2 clues. But not with this card. You not only resign from anywhere but you don't have to spend the 2 clues, which is awesome if you are some kind of fighter.

vidinufi · 46
It is the same with the second scenario in the deluxe expansion of Forgotten Age. If you have play it, you will understand ;) I haven't got the opportunity to test this card yet, but I think that if you know a scenario well, it can help you A LOT! — Sotosprotos · 70 5/22/20
This card is a great candidate for adaptable, if you know which scenarios it's useful in. Adaptable basically allows you to avoid the whole, "in some scenarios, it's just worse manual dexterity" problem — SGPrometheus · 569 5/22/20
3

Admittedly, I have not used this card in a deck yet.

If I were planning on using Charon's Obol, I might plan to use "I'm outta here!" more, since surviving a scenario without being defeated is that much more important in that case. However, I'm not sure how often I'd use it outside of that.

For investigators who can take it, I think that Elusive is the better alternative. Resign effects are normally printed on either Act cards or Location cards. If the Resign option is on the Act card, then there's no reason to use "I'm outta here!", since you could just use the Act's action normally. If the Resign option is on a Location card, you can use Elusive to get there (since it has the Fast keyword) and then resign. Elusive does cost 2 more resources, but it gives you a lot more flexibility in how you can use it. I think it is probably the better pick in most cases.

The two icons are situationally useful. If you're going to use card for 2 icons, though, you're probably better off just using Manual Dexterity for the card draw.

(Spoilers for the Carcosa cycle)

An interesting rules query for this Path to Carcosa Act card - would this card work for the card's Resign action regardless of the location of monsters and clues? My gut instinct is "yes" because the ability is "in play" - it exists constantly but is only useable under certain conditions. If that's true, then that would be the dream use for a card like this one.

(End Spoilers for the Carcosa cycle)

Ultimately, I think "I'm outta here!" is situational, and Elusive is able to cover those situations on its own (as well as quite a few more). For investigators like Rita Young that have access to "I'm outta here!" but not Elusive, it might be worth considering for those edge cases, but even then I would say there are probably cards that would be more regularly useful than this one.

ArkhamInvestigator · 260
Why wouldn’t it work for the act in question? The ability itself is both in play and a resign ability, thus “I’m Outta Here!” can be played and has its own Resign ability. The same applies to a time least one other Resign ability in TDL (although the condition is a bit less of an impediment). — Death by Chocolate · 919 2/19/19
It can be clutch if you know the scenario and you have adaptable. There are a few scenarios that this let's you rock walk to safety from anywhere without worrying about the nuance of elusive. Generally Elusive is just better though. — Myriad · 1106 2/22/19
1

As some people mentioned, this card is a good replacement for Manual Dexterity. Same number of icons. It's worth remembering that Resigning does not provoke attacks of opportunities. If you are engaged with ennemies, have low health/sanity and are about to die, you can play this card even if you have no resources left to avoid getting a Physical or Mental trauma. That said, will not work with all scenarios. Would be interesting to see stats per campaign.

Ezhaeu · 40
I actually did some homework about that, and you can basically do all Dunwich light speed with Abandon abilities, except for Essex County Express (and maybe another scenario). I still have to build a whole deck around it. You could decide to maximize its use and grab all the victory points you can before getting the hell out of here. — banania · 355 3/21/18
This card, which is worth noting, has 'you get the hell out of here' as a rules text. Never have I ever seen a card game using such accurately worded rulings. — H0tl1ne · 73 3/21/18
This card could use an alternate name: " I AM GOING ON AN ADVENTURE!!!" — Andronikus · 1 5/20/19
1

I love this card.

At first I figured I would just play it for the boots. But then, while playing a game, swarmed by monsters, some with really high agility, I was like, "man! I am screwed!"

And then, as if by fate and chance, I discover a Resign card on the board. The very goal to the game. And then you realize just how amazing this card is in a pinch. It costs nothing and you don't have to pull a coin. You just get out! That's an alive and fine investigator.

Wanna do some last minute clean-up, take an extra risk? This card let's you do that. You can spend your turn trying to milk XP or just try crazy stuff, and then get outta dodge.

10/10. Love this card. I would run 1 and just hope I can draw it when the situation calls for it.

jjfrenchfry · 2
I agree it's a good card, but I think the trouble is the competition for cards that fill similar roles. Manual Dexterity is the first obvious choice since that gives you the same double boots, however, that one will net you a card to replace it. But if you have decent card draw, a resign option is comparably equal in terms of usefulness. The other option is to take Elusive which is a 1 boot and 1 book so not as good icon-wise, however, for 2 resources, you could simply warp to the resign location (for fast) which is probably better since Rogue's aren't usually poor. It's a preference thing though at the end of the day. — LaRoix · 1496 6/23/20
It's an absolutely perfect card for Adaptable, you can certainly say that for it. There's a huge amount of variation across scenarios in how important resigning quickly is, and Adaptable lets you use in scenarios where it's a big deal and take it out for ones where it isn't. It does do two things elusive doesn't FWIW- it lets you resign where the resignation spot has enemies and it lets you resign via resignation abilities that aren't on locations. So, (vague-to-avoid-spoilers) , it can get round some limitations and conditions on resignation that elusive can't. Sooo, I think it is one of the most situational cards in the game, but within its niche, it's pretty powerful.. — bee123 · 24 6/24/20
1

Initially this card seems kind of useless. Honestly I can't really comment on its applicability to your typical investigator but I do know of two investigators who can benefit a lot from it.

Zoey and Jenny can both get really screwed by their weaknesses if they drop in the last few rounds of the game. Zoey can get caught traveling all the way across the map in order to kill some jerk monsters and Jenny searching for Izzie in far off lands. This can be especially problematic in large maps or ones flush with monsters. If you only have a couple turns left in the campaign before the final Agenda procs you may not have that many actions to spare, and especially for these weaknesses they are on-par with being defeated anyway (which is significantly worse than any other investigators weakness penalty). In this method you can almost halve the number of actions required to fulfill these without screwing over your win condition.

It's not a perfect fix, but I'd consider a 1-of for these investigators to help them out alongside action-investments like Police badge or action-compression items like Cat Burgler.

Difrakt · 1042
I don't follow how this card helps wit the problem. Resigning is the same as being defeated for the purpose of those weaknesses, isn't it? So you don't avoid the penalty by resigning. — nierensieb · 1 4/26/17
Yes, this was clarified in a recent errata. This card does not save you from your weakness. It's main use in the current set is being able to resign without being in the VIP area of The House Always Wins. — FBones · 13518 4/30/17
If this card was "fast", it would save 1 action in many scenarios, but i'm not sure if that's enough to make it worthwile. — Django · 3684 5/11/17
He said that it halves the number of actions necessary to fix those weaknesses, not gets rid of them completely. IE you only have to go halfway across the map to deal with the weakness, you don't have to come BACK to resign. — Ebrey · 191 7/12/17
I'm currently replacing manual dexterity with these, trading the card draw with the occasional utility. — bigstupidgrin · 78 2/18/18