Before revealing chaos tokens for this test, choose one of the following symbols: (, , , or ). Ignore the effects of the chosen symbol during this test (including its modifier). 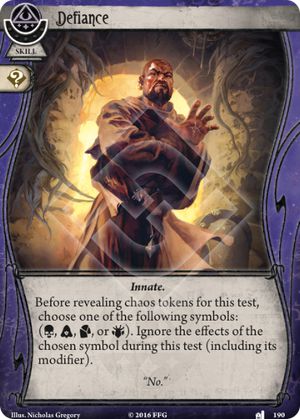 Defiance seems a low value card but it shows its strength in two independent conditions:

Say you’re playing The Midnight Masks and you’re about to make a skill test with a skill value of 4 for a difficulty of 3. If you play Unexpected Courage, you will pass the test in all cases. If you play Defiance and choose , you will also pass the test in all cases. It’s the same for The Miskatonic Museum (if you have in Chaos bag OR there is an Hunting Horror at your location), Essex County Express (before agenda #3), Blood on the Altar and Carnevale of Horrors.

With Extracurricular Activity with , Defiance is better on all difficulties, as it’s really complicated to ensure success without it. Without , Defiance is equivalent to Unexpected Courage as soon as you have 10 cards in your discard pile.

With Undimensioned and Unseen, Defiance is slightly better, as Unexpected Courage can’t protect you from the additional effect.

On the contrary, Defiance is worse or slightly worse than Unexpected Courage for The Gathering and The House Always Wins (because of the positive effect of that you won’t want to cancel). Only 2 scenarios in a total of 13 published scenarios.

For Where Doom Awaits and Lost in Time and Space, it depends on the exact situation.

In conclusion, not a terrific card, but it can make sense including it in a deck, especially if you play in easy mode. You also may want to include it in hard or expert mode because the situational effect can become very strong.

Note that if you use player cards that take advantage of success margin as .41 Derringer, Unexpected Courage will be preferred.

Okami · 41
Thanks for the detailed write-up and also for mentioning the way the card plays differently based on the difficulty of the Chaos bag. — miggydoh · 75 8/22/17
It does seem as though defiance is straight up better than unexpected courage in most circumstances as you pointed out and it took me a while to come to that conclusion. Even though it is 1 less while '?' it will likely remove 1 or 2 tokens of failure in several circumstances just as well as the extra '?' on unexpected. And it also has the added benefit of straight up ignoring an effect on top of it. — Bronze · 164 10/24/17
What about the -3 and -4 icons? Unexpected courage is better against those. — alercah · 1 11/14/19
I'm a total, so I apologise if this is a stupid question: how do I play this card? Can I add the "?" to a skill test and that then includes the cards text? Or do I use the text alone for a skill test, ignoring the "?" pip modifier? Also, i feel like this _should_ go under Diana because it doesn't say it ignores the token, therefore not "cancelling anything. It says ignore the "effects" of the token. So the token is still drawn, then the effects cancelled. Or is that wrong, too? — Deadlykipper · 1 2/9/20
*"I'm a total *noob*, so ..." — Deadlykipper · 1 2/9/20
5

I play with 4 investigator. Our team love Double or Nothing. Our team love stacking bonuses. When you're doing a test (was done in a real game) with : Defiance + Double or Nothing + 2 Quick Thinking + Deduction (XP) (+ some other buffs) on Rex Murphy You really want to have defiance to decrease the chance of failing to only 1 chaos token. That's not necessarily clever to put all our ressource on one test, but that's fun to discover 8 clues and gain 4 actions in one action.

Moreover, in a 4 investigator team, it may be difficult to finish your deck, since other people migth be interested in the good card of your faction. This card is never a bad pick, since in the worst case, it is a little more than a +1 to any test.

So not the best card ever, but a decent 0XP card. However, it may be difficult in 1 or 2 extension to find a place in our decks for this card, since better cards will probably be published.

MoiMagnus · 61
I hate to break it to you, but with the cards you suggested, you could only get 7 clues from a location. Double or nothing doubles the results of a success which includes discovering the clue and the additional two from Deduction. (3*2=6) But Rex’s ability is a Reaction trigger ‘after you succeed’. While DoN doubles the effects of success, you still only succeed once, so Rex’s ability only triggers once. (6+1=7) — Death by Chocolate · 1131 10/12/18
4

This card got a big upgrade in the Path to Carcosa campaign. As it currently stands, you can play through to Echoes of the Past with the chaos bag only having one of , or along with . Since is usually an okay pull, you can use Defiance during The Path to Carcosa to ensure you avoid the only other ‘symbol’ token in the bag (except ) and know that you will almost certainly pass a particular skill test. This is especially good for Jim as he can ignore the negative modifier of as well - leaving only the token to prevent him from passing any test. If the rest of the scenarios in The Path to Carcosa continue the same theme of having only one type of ‘symbol’ token in the bag, this card will only get better as the campaign continues as the negative modifiers and penalties on those tokens will increase and avoiding them will become much better - especially on higher difficulties where the negative effects are worse and changing multiple tokens to 0s will help to reduce the average negative impact of the chaos bag.

This card mystifies me. When a game includes a card like this, I tend to assume there's something that can make it worthwhile; a combo with another card or in a specific situation or scenario. But I can't really find any point in being Defiant.

There's a set amount of tokens in a chaos bag. In the core Easy and Normal bag there's 6 special tokens (Skull, Cultist, etc) and 12 number tokens (+1, -1, etc). The Hard and Expert bag adds more numbers token, but not additional special tokens. Two of the special tokens cannot be chosen; the Elder Sign auto-success and the Tentacle auto-fail. There's also no Elder Thing token in the starting bags.

Campaigns will often add a few more special tokens depending on the outcome of adventures, often Elder Things and more Broken tablets.

Let's take the Skull token as an example since you have two Skull tokens in each bag. That gives you a 12,5% chance (2/16) to cancel one. That's not really useful, especially since Skull token effects are often manageable. Even if your campaign has added two more (often horrible) Broken Tablet tokens to your bag, you'd still only have a 17% chance of drawing one. That would make the card useful once every sixth time you play it.

Yes, the card does add +1 to any skill test and that's nice. But cards like Unexpected Courage will be far more dependable if that's what you're after.

My guess is that we'll get an upgraded version of this card in a future expansion. Something you'll have to buy for Xp, but that lets you ignore more (even all?) special tokens.

olahren · 1927
I do agree with our assessment. There is something to be said about adding a ? to your test and also as you put it, increase your odds by another 10-17% on top of what that +1 already added. I don't believe that the card is that great either and an improved version would be a welcome addition. There is something to be said about applying it to a test to keep something horrible from happening to you. There are certainly some circumstances where one of the tokens cancelling your skill cards would be destructive to your test, or dropping clues here if you pull that bad token with a Locked Door up at the location would be hugely disadvantageous. Those kind of things are hard to just place numbers to. I don't see myself putting this into my decks at the moment. — Bronze · 164 7/30/17
This card seems to get the most use in a Jim deck. You'd never pick Skull and like — miggydoh · 75 8/2/17
(tablet cut my comment short) You pick whatever token you may have two of in the bag or the worst one to up your odds of success. Hard/Expert bump the usefulness of this card up slightly because of the harsher token effects. — miggydoh · 75 8/2/17
Matt from FFG confirmed that if defiance does not reveal the named/indicated token, it cannot go under Diana. His response is below: "In order for Diana's reaction to be triggered, an effect must actually be ignored or canceled. For example, if you commit Defiance to a test and name the skull token, but the skull token is not revealed, you did not actually ignore anything, so you cannot trigger Diana’s reaction. (In other words, Defiance creates a lasting effect that says “if the chosen token is revealed, ignore it,” but since that token was never revealed, the lasting effect did not ignore anything." - Matthew Newman. — RichardPlunkett · 12 5/10/19
3

just a heads up to players looking for advantages in Path to Carcosa. You spend a lot of scenarios with just the and a single other type of special negative token in the chaos back.
In other words, defiance has just two targets, the three and the two extra token, all of a sudden this card is turning three draws into 0's or 2 draws into 0's and ignoring whatever else they may do to you. Combo with Jim Culver and now you have just one target and your deck now has a total of 5 additional 0's, unparalleled reliability and it benefits every type of test.

This is good for Jim Culver decks because it re-enforces his archetypical ability, reliability.

This is good for other decks because it, at worst, gives them Jims's ability.

The average Carcosa bag contains 17, 18 or 19 tokens. (Easy+Standard, then Hard or Expert respectively). Now you just need to do some math to understand the value of this card. If we assume that the skull is a -2, ignoring the penalty means that there's now 6x 0's, If you break even on the skill check then you've got a 39% chance to succeed, a jump up from 22%, if you have +1 then it jumps to 50%.

If you continue the math you'll spot an issue however, using this card to turn a -2 beats the purpose when you sport a +2 modifier anyway! In other words, learn your chaos bag and do the math. The most efficient use in my opinion is to play this card to get a +3 modifier and to negate a -4+ token type, for example in Curtain Call when you've got 4+ horror on you. In that exact circumstance a +3 on hard has a 50% chance to succeed, playing Defiance to net that +3 and negating the Skull would get you a 72% success chance.

Now if you do a little more math, you'll discover a flaw, Unexpected Courage does pretty much everything I just mentioned, and is a little more flexible since the extra icon helps succeed whether you draw special tokens or just a really large negative number. This means that defiance isnt strictly better than courage, it does a different thing, it negates all the extra bad effects of the negated token, thus there's no risk of horror or enemy spawns or other negative effects that might be the result of bad token draws.

TL:Dr. Defiance is bad in a vacuum, good when used correctly, sets itself apart from Unexpected Courage by having a somewhat similar base-job but actually has a very different job that swings in usefulness between scenarios. If you would put Unexpected Courage in a deck then give this a consideration, when used well it should give you the same net benefit as Unexpected Courage and then some extra.