During the next fight action you perform this turn using a Ranged or Firearm asset, treat each , , , , or token you reveal as a "0" token. This action does not provoke attacks of opportunity. 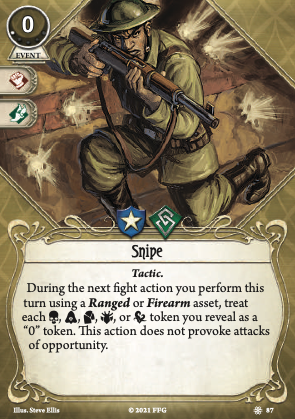 This is a pretty cool card, I think, with a few notable synergies and applications.

Probably the most notable part is that Snipe can cancel an . That is very worthwhile if you're going all in on a test, which is very likely with, for example, a Shotgun or Sawed-Off Shotgun. Or anything else with limited ammo but a big payoff.

Outside of mitigation, it is greatly increasing your odds of drawing a 0, but I don't know if you want to spend two actions to fight when you still have something like a -4 failing your test, much less a -2. However, with the help of some cards, you can play with the odds even more with stuff like Recall the Future and Olive McBride. The fact that you actually treat the tokens as a "0" is particularly spicy with Recall and Olive.

It also has a particularly nice synergy with the taboo .35 Winchester, as "0" tokens have a non-negative modifier. Considering that this play style already wants you to be running bag control, this might be the most interesting place for it. It's unfortunately out of reach for Jim Culver, but perhaps Sister Mary or even Jenny Barnes might want to play with this.

As a final note, Chuck Fergus can make it fast, thus mitigating the main drawback.

Zinjanthropus · 208
I can totally see myself using this with M1918 BAR to ensure a big hit on something terrifying. Too bad that in EotE I can still draw two Frost tokens and fail through them. — thinsilver · 8 11/10/21
Notice that non-taboo Winchester also works with Snipe. Since Snipe make the token as "0" token, you can get +2 damage with non-taboo Winchester. — elkeinkrad · 316 11/25/21
Parallel Roland can also play this as fast since it's a tactic. — tactis · 1 11/27/21
You probably shouldn't use this card because it's going to seriously hurt your upper arm the moment you shoot, and you will be lucky if the bullet escapes the bent barrel. I'm not even sure what the dude is looking at but it certainly isn't a method to ensure a well placed shot. — thekinginperiwinkle · 134 12/1/21
0

This is similar to "Eat lead!", but this costs an action and can let you pass if your skill is low and happen to draw a special token. Eat Lead costs 1 more EXP, costs an ammo (which is usually somewhere around 1/4 of the cost/action of a gun) and is probably more helpful if your skill value is decent/high.

I think its a fair exchange, maybe slightly leaning towards Eat Lead but neither are that great. This would've been a lot better if it was Fast (we may see a level 2 or 3 version at some point for that?).

I assume it works with Dark Prophecy, right ? I'm not sure if using both the result is:
a) I can't select a special token with Dark prophecy as they are now considered as "0" tokens or
b) I MUST select one of these tokens by the effect of Dark prophecy and I treat it as a "0"
but either way now I have very low chances to have a big negative modifier.

For TCU in expert difficulty, of the 15 tokens, 5 are now considered as "0" tokens and the worst case is, depending on the interaction between both cards (see above):
a) because I can't select the special tokens, I can choose the one I want among the 5 and so between -2, -3, -4, -6 and -8 I choose the -2
b) if there is a special token among the 5 I must select it and so I resolve a "0" or there isn't a single one and I'm back to the case above

So by combining both cards in expert difficulty I spend an action to be sure that the following action I won't have worse than a -2 modifier for my attack with Shotgun, Sawed-Off Shotgun, Beretta M1918, or other, right ?

AlexP · 199
I believe Dark Prophecy still considers them to be what they are for the purposes of selecting a token, but even if it doesn't that just means you'd get to choose any token including the symbol token (since then there'd be no way for the "if no such token is revealed" clause to *not* trigger) — Thatwasademo · 43 2/15/22
That is to say, if you reveal a skull and a bunch of large negative numbers, you get to choose the skull/0 either way - the difference only matters if you also reveal a +1 or Elder Sign — Thatwasademo · 43 2/15/22
Needs lots of different cards, but sounds like a fun combo for Dexter with "Old Shotgun"! — Susumu · 217 2/15/22
It's only 3 damage over 2 actions, though. So he certainly has much more powerful ways to kill! — Susumu · 217 2/15/22