After Nkosi Mabati enters play: Name a non- chaos token with a symbol. Until this card leaves play, the named symbol is your "sigil."

When an investigator at your location reveals a , , or symbol, exhaust Nkosi Mabati: Search the chaos bag for your sigil and reveal it, instead (returning the other token to the chaos bag). 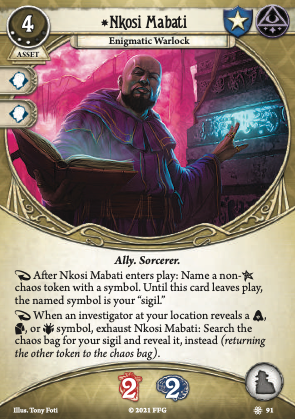 This Card is Jim Culvers new go to signature Ally. Making other bad tokens skull-zeros is incredibly strong with him and powers up other cards triggered by skulls like Jim's Trumpet or Song of the Dead.

Maybe pair with Protective Incantations to keep the other hard number tokens out of the bag.

So, I was like checking this guy out for a sister Mary deck, and while I was looking at cards, I saw teamwork, and then I read the card again, and I thought what if I use teamwork, to give it to Stella, and when she played it, she assigns her 'sigil' to be the auto-fail... I don't think that would be beneficial at all, but if anyone would want to call an auto-fail on demand it would be her... lol

Not a review but a question: does this work with Bless and Curse tokens?

Cpt_nice · 68
Bless tokens count as having a symbol. So you can use the second ability to swap for a Bless token. But only if there is one in the bag, otherwise the old token won't be returned to the bag. — duke_loves_biscuits · 1126 9/8/21
A clarification question. What non-auto-success-token with a symbol is meant on this card? Could it be a Blesses or Cursed token? I guess it means any non-numbered/non-auto-success-token,.. just want to be sure. — Rune · 1 12/29/21
It's any token besides a number token and the Elder Sign. So it could be Bless, Curse... Even a Frost token, tho no idea why you'd want that. — MindControlMouse · 12 4/5/22
2

I think this is a trap card even for Jim Culver. The Cultist, Elder Thing and Tablet tokens are usually worse than Skull tokens only by a bit; usually its around 1-2 points harder. Sometimes they even has the same difficulty and only rarely is it more than 1-2 points. I'd rather take a +1 to all skill tests from a different ally (so you can nullify high negative numbered tokens as well).

The benefit Nkosi has is that you can ignore the effects of the other special tokens which sometimes helps. I don't think this small benefit is worth the cost of 3 (6) exp and a very expensive 4 cost in the ally slot. Seems like you'd be better off taking an ally that gives you +1 Willpower or sticking with Arcane Initiate for more consistency and use your exp for something that'll make a bigger difference.

Might have some really exotic use with naming bless/curse tokens but needs a really dedicated build for it.

fates · 18
For Jim a skull is a flat 0, so obviously better than what you give it credit for. On hard/ expert some tokens punish you just for revealing, not just failing. Like "Doom of Etzli", where the elder thing places 1 doom on your location, costing you two rounds during the first agenda. (Though to be fair, I think paying 6 XP from "The Untamed Wilds" for him is really expensive.) Other investigators (Sister Mary) might take him if they go full into Blessing. I agree, that there are better options in most cases, but suppose you could build a deck with him, where his is far from a trap card. If the black cat is on your side, he looks like an auto include. — Susumu · 217 4/20/22
A lot of people take cards that give them +1 to stuff over cards like nkosi and don't consider how valuable his effect being able to trigger on your teammates is. I'd say Nkosi isn't as strong as granny orne but probably not too much weaker. — Zerogrim · 248 4/20/22
I never assume I'm going to draw a 0. Hail married seem like a waste of action and many special tokens are nasty only on fail. — fates · 18 4/21/22
"many special tokens are nasty only on fail." — DjMiniboss · 44 4/21/22
That statement is less true on Hard and Expert, as Susumu pointed out above. I also think that this makes testing at +2 or 1 more viable, which is nice. — DjMiniboss · 44 4/21/22