After another investigator moves from your location to a connecting location, exhaust Safeguard: Move to that location.

Keep an eye out for any trouble, she told me. I rolled my eyes. There was always trouble.
Lukas Banas
Nathaniel Cho #10. 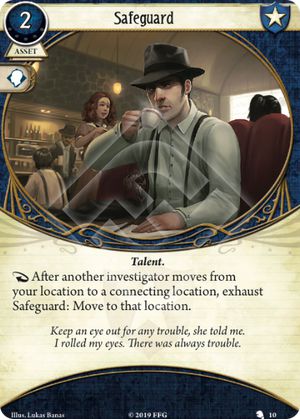 Should I run Safeguard, you ask? Well, would you run a 2-cost, slotless Leo De Luca?

OK, so maybe that comparison is a little bit flippant, but I do think this card is quite pushed and is probably the best level 0 Guardian card we've seen since the Core Set. This thing does a very respectable Pathfinder imitation, while being cheaper and not costing XP.

Note all the tricks you can do with this card and enemies. You can still activate Safeguard if you have an enemy on you. This allows you to drag enemies across locations without attacks of opportunity. This has cool applications for investigators like Roland and cards like Grete Wagner. Even outside of that, I've found that this comes in handy surprisingly often. For example, does your location have some nasty text that makes it unpleasant to stay and fight there? Just Safeguard your way to a nicer spot, action-free. With Safeguard II my Guardians have found themselves dragging enemies across the map in frankly ridiculous fashion.

Note that, unlike with Safeguard II, if another investigator moves into a location with an enemy, this version of Safeguard does not allow you to swoop in to preemptively engage that enemy (since you move "after" the other investigator). This is one of several reasons why I would recommend Safeguard II as a strong upgrade to an already great card.

Another benefit you'll notice from Safeguard, beyond the obvious one of saving you a ton of actions, is that you'll much more often be able to end your turn at the same location as the rest of the team. This is usually a really good thing. Investigators will more often be able to support each other with commits during the Mythos phase, for example.

Finally, Safeguard gets even better if other investigators are running the movement cards of their own faction. It's so strong with another investigator's Pathfinder or Shortcut. If you haven't tried a multiplayer group where one player takes two Pathfinders and everyone else takes two Safeguard IIs, well, you really should. It's pretty sweet.

CaiusDrewart · 2507
I played it in Nathaniel and am currently playing it in Carolyn, who doesn't really care about engaging the enemies herself, and I agree, this is a great card in everybody, who can take it. — Susumu · 158 3/18/21
Safeguard also combos nicely with Scene of the Crime, helping you position yourself to scoop those free clues. — Mordenlordgrandison · 322 3/18/21
Yeah, I don't think you have to be a fighter to want this card. It ends up being good for pretty much any investigator. This makes it one of relatively few level 0 Guardian cards that have appeal for investigators who aren't trying to fight with Combat. — CaiusDrewart · 2507 3/18/21
Safeguard basically an auto-include in anything beyond solo, no combos needed. It'll be easier to describe the situations where you don't want Safeguard! — suika · 7849 3/19/21
Is your teammate moving into an unrevealed location that turns out to be horrid, its cool safeguard (0) has you covered, just don't trigger it. Honestly the only thing this is missing to just be the best card ever is a wild icon. — Zerogrim · 203 3/19/21
2

ALMOST as good as Safeguard, but not quite, but 1 saved move near every turn past the point of playing this card is fantastic. There IS a little bit of tricky rules text though that ensure that you'll eventually want the upgrade.

Movement is king in many scenarios of Arkham and the ability to have a buddy cheuffeur you in and out of locations can be mind-blowingly clutch. At the end of a scenario you might have 10, 12 saved moves from ths one card, and that's just insanely good.

DO keep in mind this MAJOR rules text difference between Safeguard and Safeguard:

That said, I do recommend this thing, it's good, but it does cost 2 resources, a rather hefty price for the resource starved faction, and obviously, it's best played in a big 4-man team, it'd be fine in 3-man, but I wouldnt play it in 2-man unless you're playing a "Beef & Brains" sorta specialist team.

Tsuruki23 · 2088
Compare to Pathfinder, even without the timing benefit and even at one move a round, free moves for a slotless 2-cost asset is great. Obviously more flexible the higher the team size, but great for any Guardian that wants to stick with their team. — Death by Chocolate · 919 8/28/20
This card is better for carolyn than most guardians cause she's not much of a fighter and mostly doesn't want to be engaged anyway. — Django · 3684 9/1/20
did a play through of innsmouth recently and the amount of saved actions on the guarder were obscene. Constantly wishing my guardian have this if they ever don't. — Zerogrim · 203 1/28/21