If this test is successful, draw 1 card (2 cards instead if it succeeds by 2 or more). 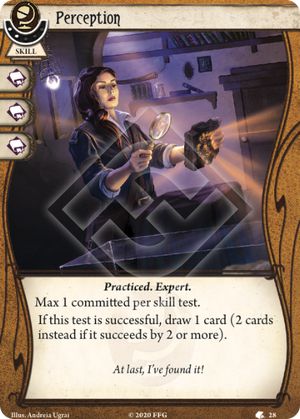 I... don't know about this. I mean, it's less flexible than Inquiring Mind (at least early in the scenario). If you overplay it, you can get 2 cards, but you are better off playing Preposterous Sketches (2) if you want cards. Maybe Amanda Sharpe likes this, or for the higher-difficulty Chaos Bags,

LivefromBenefitSt · 167
Or pair it with Deduction (2) as part of your Practice Makes Perfect package. Of the entire cycle of lvl 2 upgrades to the original neutral skills, I think this one is the most relevant (followed by Overpower for certain niche decks). — Death by Chocolate · 421 9/8/20
This is muuuuch better than Sketches. Boost intellect on an important test, like a Deduction 2 test, and then get a bunch of cards to replenish it. Pretty much every Seeker deck still takes Perception, and the upgrade is just more rewards for doing what you already want to. — StyxTBeuford · 2317 9/8/20
And yeah, the synergy with the very powerful Practice Makes Perfect bumps it up to a 10. — StyxTBeuford · 2317 9/8/20
I would agree that this is better than Sketches. No action cost, +3 to the most common type of test, Practice Makes Perfect, obvs. You could also combo with Double or Nothing in certain decks (currently Rogue Mandy, eventually Trish) — Zinjanthropus · 93 9/8/20
I mean, it depends. If you want clues, you'll spend that XP on Deduction (Perception + Deduction (2) will give +4, 1 card, and 2-3 clues while Perception (2) + Deduction will give +4, 1-2 cards, and 2 clues). If you want cards, you just go with Sketches (2) or, more likely, Feed the Mind (0) or (3). If you really want cards, I suppose, you could go with Feed the Mind _ Perception (2) and probably draw 5 cards. Doing that with Feed the Mind (3) of course, is likely to get you horror, unless your hand is empty.... My point being, that it's situational, and XP is finite. — LivefromBenefitSt · 167 9/8/20
I straight up disagree that you take Sketches 2 over this. And sure, XP is finite, but I think the general rule is, if you already were taking Perception, take its upgrade. In 3-4 players, sure, Deduction first makes sense. Below that? This beats Sketches easily. — StyxTBeuford · 2317 9/8/20
I agree that Perception (2) is not a priority upgrade, but I am almost always looking for how to squeeze more xp into my deck as I near the end of a campaign, and this is an easy pick. And regarding Sketches (0 or 2) I almost never want to be spending an action drawing cards (even 3 cards) if I could be spending my actions advancing the game instead (especially when I can squeeze some fast draws in on top). — Death by Chocolate · 421 9/9/20
Especially in Seeker, where I would regularly find a chunk of my deck locked up with level 0 cards. 2xRook, 3xRabbi, 2xEureka, 2xPMP, 2xPerception) is 11 deck slots I wouldn't upgrade/replace, but this helps with 2 of them. — Death by Chocolate · 421 9/9/20
Yeah, Sketches requires both that you have a clue on a location and that you spend an action. This is just gas in the clue getting engine. — StyxTBeuford · 2317 9/9/20