Gain 1 resource. Reveal 3 random tokens from the chaos bag. For each , , , , or symbol revealed, gain an additional 2 resources. 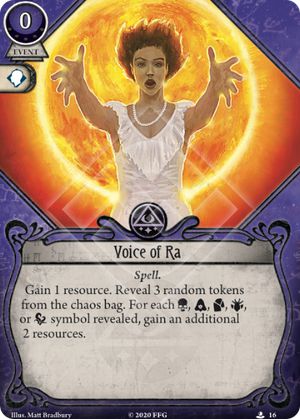 With most chaos bags, this has a reasonable chance of being Emergency Cache. With Jacqueline Fine, Olive McBride, Dark Prophecy, and/or either of the Grotesque Statues, you can have increasingly good odds of netting 7, which is a very good resource swing. This is one of the very few cards where you want to see a . Probably mostly for Jacqueline decks, but Chaos Bag Jim might like this, too.

On further consideration, it seems like Olive (and Jacqueline under very specific token pulls) might push your "scoring" tokens above 3 for even more money. If you used both of them with this card, you might draw 7 tokens and resolve 5 (assuming you at least 6 symbols including the ). Would that give you 11 resources? It would be overkill, but funny to do once....

LivefromBenefitSt · 335
Even better if Jacqueline has Dark Future out! — toastsushi · 62 9/11/20
Yea but do you really want to spend all those cards and resources just to gain 3 or so resources? I don't know. I like the idea behind Voice of Ra, but the jury is out how useful it's going to be. — LaRoix · 187 9/12/20
I think for Jackie this simply replaces Emergency Cache, especially if you've got your ability up (or arbiter of fates). Anyone running Olive probably prefers it too, but beyond those cases it's probably worse/even. — SGPrometheus · 278 9/12/20
On average it's going to be at least Emergency Cache. If you haven't had a reason to use your ability or Olive that turn, it'll become much better that E Cache, at the cost of very rarely whiffing. It's definitely worth it imo over Uncage the Soul or E Cache. — StyxTBeuford · 11925 9/12/20
So I guess in order to match E Cache, you'd have to draw 3 symbol tokens, at which point there are 3 less symbol tokens in the bag. so yea, you'd have to draw more tokens with Jacq and Olive, but at some point you will run out. Also the Elder Sign will not help you (though Jim can make it a Skull and Jacq can benefit from canceling it). Those points alone elevate the card quite a bit because you're basically forcing a pain-free skill test and who knows what else you might activate in combination. Eldrich Inspiration? Jewel of Aureolus? Of course, if I have all that up, what do I need the resources for? — LaRoix · 187 9/12/20
To match E Cache you have to just pull one token. It’s 1 resource by default and 2 per symbol. — StyxTBeuford · 11925 9/12/20
Also, easily missed point, neither E Cache or Unage are spells- this is. Arcane Initiate can grab it. So even non Olive builds benefit from it imo. — StyxTBeuford · 11925 9/12/20
Also, it has a Will pip, so unlike Ecache, it is still useful if you already have enough resources. — Death by Chocolate · 581 9/13/20
Replacement Emergency Caches are one great thing that has come out of the Starter decks. Not only are they more interesting but there are some deck builds that need more than 2x ECache at the start of the campaign and now there is the option for that. And these have little benefits like this one having the Spell trait. — TWWaterfalls · 703 9/13/20
So I need to admit something super embarrassing, but I played this card thinking I'd get only 1 resource for each token - that's it. So I used Jacq's ability to draw 3 (instead of 5) and didn't get any symbols. Then I felt justified in thinking this card was terrible. Dang, I must be getting old. But that aside, yea, since you get 1 resource and 3 tokens, odds are pretty decent you'll get at least one symbol and notch the missing 2 resources that an E Cache would have given you. So... yeah, this card's pretty decent... and I need to read the freaking text on the cards instead of spacing lol. — LaRoix · 187 9/14/20
How this card interacts with [Eldritch Inspiration](/card/05033)? For example, if I revealed 2 skull symbols and used Eldritch Inspiration, how many resources it gives at total? — error · 4 9/23/20
[Eldritch Inspiration](/card/05033) does not interacts with this card, because this card does not contain any word "when", "if", or "after". — elkeinkrad · 79 9/25/20
4

The other review for this card is completely accurate, but I just want to give some statistics to help people decide if they want to use this. Using the standard difficulty Night of the Zealot chaos token pool, here are your odds:

This is slightly less than Emergency Cache, and more random. But it does have the willpower skill icon. Also, the odds are altered when the chaos token pool is different from NotZ, or (as noted in the other review, when you use effects to reveal more tokens (like Jacqueline Fine, Olive McBride, etc).