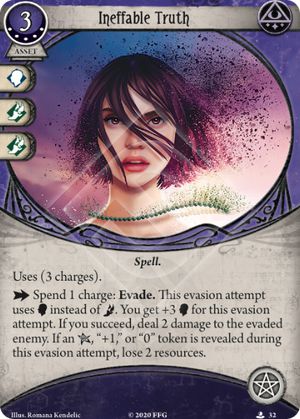 Pretty much everything that one can say for the Level-0 Version, but more so. How does it stack up to Mists of R'lyeh (4)?

This is looking like a less attractive upgrade, especially since a bad draw with Mists (4) still only costs you 1 card. Alternatively, if you compare it to Ineffable Truth (3), you are getting a +1 and +1 damage for a cost of 2 XP and the risk of an extra resource lost on an unfortunate token pull. I suspect it will take a very specific deck to want to upgrade beyond the 3-level version of the card. I guess Meat Cleaver Agnes can use this to do 8 damage to an enemy in 1 turn, leaving it exhausted at the end, but Agnes has a lot of ways to hand out hurt.

It also doesn't compare all that well to the higher-level versions of Mists, although you probably want to look at Ruduen's comments on the "good token" vs "bad token" suite in the Azure Flame review.

Obviously, 2x Arcane Research mitigates some of the extra XP issues, but you could still be spending that XP on cards that provide a bit more punch for the cost.

TL;DR? Level-0 is fine, but, if you are going to upgrade, you might want to stop at the 3 XP version.

LivefromBenefitSt · 335
Sure, it has an increased penalty while Mists4 doesn’t, but Mists4 also doesn’t have an increased upside. If you are JUST taking these for the evade effect, Mists was always a more efficient option, but 1) unlike the 0 or 3, this 5 deals 2 damage, and 2) it is easy to mitigate the penalty by just having 1 or 0 resources. — Death by Chocolate · 581 9/15/20
True, but how often is “Evade and do 2 damage” something you want to do? Hitting for 1 Damage is a nice setup for getting rid of a 3-health enemy, but 2 is awkwardly extravagant. It would be useful for taking down a 5- or 7-health Elite, but surely you would want more attack power in that case. — LivefromBenefitSt · 335 9/15/20