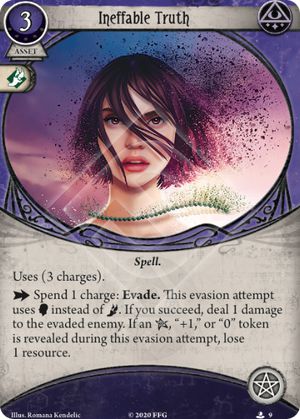 I may need a few more games with Jacqueline Fine under my belt, but I think this is the worst Mystic evade asset in the game. Let's start by comparing it to what it originally competed with: Mists of R'lyeh. Firstly, the action compression of the evade here is "do 1 damage", while on Mists it's "move". I think nine times out of ten, if you're evading instead of fighting, 1 damage is less valuable than moving away. Evade actions are almost always followed by move actions, so having both in one card is nice, versus 1 damage which is only nice if you're pairing this with a fight spell to close in some extra damage (on an odd health creature say), or if you have a fighter with who can close it out, or, ideally, it's that plus retaliate, so the evade cancels that retaliate. But those situations are all niche compared to the near universal truth that moving after evading is very helpful.

Now, it also costs 1 more and gives you 1 less charge, for some reason. Possibly because the devs overvalued the bits of 1 damage. Or maybe because they think the downside here is just that much less severe than Mists'. Now, in fairness, with Jackie you are more directly motivated to pull spooky tokens and avoid good tokens- cards like Dark Prophecy and Prescient show this pretty readily, but also her ability is to draw a card if you ignore her elder sign. So for her, there's at least a valid argument here that you would be falling into Mists' downside a lot more than Truth's. Except, I don't buy that that matters much. You don't have to use your ability on your evades, and, more importantly, you don't have to use your ability to dodge the good tokens. And if you do pull that sweet sweet and can still pass by ignoring it, and that forces you to take a spooky token, at least you can use that still as an opportunity to cycle a card out. I would also say, and this is just personal experience, that Jackie struggles way more with resource generation than card draw. Unless you draw Robes of Endless Night early, or get lucky with Voice of Ra, you're in for some hard times.

All of this is just brushing it up against the old Mystic evade spell, and, to be honest, I am a huge fan of Mists of R'lyeh. That card is dynamite in solo play especially. But there's a new option with The Innsmouth Conspiracy deluxe box: Sword Cane. First, you get compression here already just by virtue of playing it (you only play it the moment you need it). It costs 2, which is very fair for an evade. It also doesn't actually run out of charges. The only real two downsides I can think of is it doesn't offer extended compression (matters more as Akachi or if you're trying to add charges to spells) and it exhausts, but I think both of those things are fine in return for unlimited evades at your stat. It does also give you a similar option to Ineffable truth for pinging a single damage, which pairs well with your 2 damage spells, effectively conserving you a spell charge each time you do. And, one last big upside, it takes a hand slot, not an arcane slot. That's huge in my opinion, as Mystics rarely use their hands for anything.

So let's go through the thought process now. First, you are a Mystic, and you want some means of evasion in your deck. Okay, first justify why you don't want to use Sword Cane. Most obvious answers are: You can more easily draw a spell like Mists of R'lyeh using Arcane Initiate, or you're playing solo and want the move compression. Now, taking Mists, why would you take Ineffable Truth? You don't want the pinging damage probably, as, if you did, you should just take Sword Cane. So it must be because you're playing Jim Culver or Jacqueline Fine or some other Mystic who is worried about revealing too many spookies and losing cards. In which case, I think you just take Sword Cane- even without the Initiate synergy, and especially when you factor that many of the gators that reveal spookies more often run Olive McBride or some other ally before Arcane Initiate (you could take both to be fair), Ineffable Truth is too expensive and does too little to justify itself. It is an incredibly awkward card that I don't see myself taking ever again.

StyxTBeuford · 11189
You make excellent points here, but in my experience there are plenty of times that evades aren't followed by movement - especially in multiplayer. Sometimes you just don't have the actions to kill the enemy this turn because your fighting a boss with a giant hp pool or several enemies were drawn in one round. In those instances you are usually looking to evade just to stall the enemy for a bit and the extra damage is more useful than an extra move (especially when there are still some clues to pick up). In those sorts of team comps and such, you aren't evading regularly enough that Mists' extra charge is that helpful. I will agree that Sword Cane makes a pretty compelling alternative to both evade spells for all the reasons you list, but it doesn't provide the same action compression while setting up enemies to be defeated next round. — Death by Chocolate · 509 10/12/20
I also agree that i often didn't use mists move action as there were clues left on a (victory) location and i didn't want to come back later. One evade is sufficient most of the time, so the cane is a great alternative. While it can't be searche by arcane initiate, thinning your deck with her makes drawing other cards more likely, including the cane. Backpack is also an alternative. — Django · 2885 10/12/20
Completely fair points all around. I will just counter that Mists' move is at least optional. Sure, it would be better most of the time to do 1 damage than to do nothing, but that flexibility is still nice- Mists would be a much worse card if you were forced to move from a location you wanted to remain at. It is alternatively possible for Ineffable Truth, whose damage is non-optional, to kill something you maybe didn't want killed, say for Trish Scarborough's ability. Again, it's niche, but worth considering still. — StyxTBeuford · 11189 10/12/20
Serpents, Innocents at the hotel, people like Josef Meiger you want to protect, even though they might attack you in the beginning, there are several cases, where I would rather prefere, the damage being optional. I would agree, the Mysts are most of the time the better card. I played TDE with vanilla Jacqueline, though and would say, with swarming enemies, the damage is kind of apreciated. — Susumu · 2 11/10/20
* Mists, not Mysts. What a typo. — Susumu · 2 11/10/20
1

Completing the "Good Token" trinity, we have a replacement for Mists of R'lyeh. It

Losing a resource instead of a card is a definite plus, the extra cost and lost charge a definite minus. Whether the move or damage is better depends too much on play style, enemy, and scenario. Mists can help you escape a bad enemy (if there is a safe space to move to) , Truth can help set you up for a 3-Health kill with a single attack charge same turn or next. Or a 4-Health kill if you are Agnes with a Meat Cleaver and a bit of combat boost. Or it could accidently kill of Vengeance enemy you would have preferred to just Evade. Let's call it a wash.

Otherwise, most of the comments Ruduen made under Azure Flame apply here -- at lower bag difficulties and earlier in a campaign Mists is favored, higher and later, Truth is less likely to hit bad tokens. If you have a Crystalline Elder Sign or 2, maybe there are no tokens that can trigger the negative side of the card.

I'm liking this new design space. It's not that the new set are better than the old set, they just hit slightly differently, and that gives some room for deck design that is a lot more nuanced and tailored to individual campaigns and scenarios, and that feels pretty exciting.