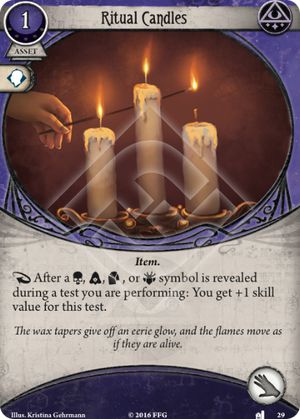 The ritual candles to me are something that I thought were considerably good at first glance, but started to come around on them after further investigation.

The typical approach that I tend to take for any test that matters to me is to get to the +2 range in a 'standard' scenario. I mention 'standard' because my opinion of ritual candles changes when we start thinking about 'hard' difficulty and beyond. In 'standard' difficulty level play the +2 that I aim for on checks is going to succeed the majority of the time regardless of whether I draw a , , or (less so on the symbol). That means that the ritual candles are doing nothing for me in those situations that I really care about it. In the hard difficulty level you can still aim for a +2 and all of a sudden the candles are now bringing that -3 into the +2 range of success for the investigator and the chances for success go up significantly.

So as far as using it for standard scenario play, I am a little down on the card, but in hard mode play I am feeling positive on the card.

The other way to play when you get the ritual candle when there are several -2 symbols would be to then just provide a +1 to your skill check and possibly get an extra pull of the bag that would be in your favor. You still have a -2 or two in the bag that are now bad for you though. However, you do keep the negative effect of the symbol from affecting you at that point that the -2 didn't. By putting yourself at a +1 with the ritual candle you fail on -2 pull but might pass on a "-1 if you fail, drop a clue at your location" which is a better situation to be in.

If you have no hand-slots in use as is on some characters, the ritual candles can provide some improvements, but on the most part, I am somewhat down on it unless I am playing on harder difficulty levels and then at that point I find it quite beneficial.

Bronze · 167
This would turn Skulls into +1s for Jim Culver. So in campaigns where there are usually two Skulls in the bag, that is a very huge deal imo. — majer3raistlin · 22 8/23/18
I look at it similar to Bronze put from a different angle. On Standard I plan to be at +2 to pass tests. I can fail on the worst negative numbers (this doesn't help) or on the special tokens (these help). This is a cheap +1 that can prevent a failure on those special tokens and passing instead of failing which sometimes has a terrible side effect. I will be trying these out in Diana. They will probably get dropped at some point but they should work alright. — TWWaterfalls · 852 4/9/20
3

I generally find the Ritual Candles to be an (cheap and less effective) equivalent of Dark Horse. Let me explain. The Ritual Candles gets you +1 on roughly a fifth to a third of the Chaos Bag, so at best, it's equivalent to +0.2 to +0.33 static boost to all your stats, for 1 resource, which is not bad. For example, it's 25% of the Core Set's normal difficulty chaos bag.

I tend to find better than any other class just because they are the only class capable of using so easily all their slots (hands, arcane, body, accessory, ally), they have a level-0 to enough cards of each slot-filling type.

As of today (end of Carcosa), I don't think there's much level-0 cards to fill in your hand slots to begin with. investigators can actually use the Flashlight and the Knife but most of them do not need more combat (Agnes) or clue-gathering (Marie) abilities. So If you're looking to optimize slot-filling your investigator, you should definitely consider the Ritual Candles, at first.

However, though I think it's an underrated card, it certainly isn't top-tier, that's why I recommend swapping them as soon as possible with the Spirit Athame, since you're usually performing Spell tests anyway.

banania · 373
Why is it so important to have cards of each slot type? That seems like a dubious criterion for establishing which class is the best. — CaiusDrewart · 2732 3/26/18
@caiusdrewart: While it is certainly a dubious metric, I think the point is that there is some unappreciated value in being able to use every one of your slots. How much value that really gives is hard to appreciate. — SGPrometheus · 640 3/27/18
It's only one way to look at it, true. I just really like that Mystics can have access to everything, it makes them more flexible. I don't think they are the best class right now because they don't have the best card pool. But mark my word, as the card pool grows, Mystics are going to become the unbeatable class. And there's high value in being able to use all your slots,. Just my opinion though. — banania · 373 3/28/18
This would turn Skulls into +1s for Jim Culver. So in campaigns where there are usually two Skulls in the bag, that is a very huge deal imo. — majer3raistlin · 22 8/23/18
To say that its +0.2 to +0.33 isn't the best metric. Its a +1 exactly when (sometimes) a +1 would matter. If it were a +1 in 50% of the cases when that +1 would make the difference, then it'd better calling it a +0.5 to all stats. — shenaniganz11 · 9 10/3/20
1

What about two of these, two Protective Incantations, and 2 Recall the Futures? That covers a LOT of ground. It seems to me that a setup like that could be very viable for Sefina, who can rely on Rogue for pretty much everything else, including funding the Incantations. It's also extremely cheap -- even in the xp needed to purchase -- and Sefina can get to them pretty quickly. I'm a big fan of Suggestion + Pickpocketing 2, and it ruins that, but with such incredible odds of succeeding at any test in general, and with Sefina at a natural 4 in Agility, it seems to me like the trade off could be very worth it. Heck, I might even still run Pickpocketing 2.

crymoricus · 225
I think Sefina without arcane slots will be pretty much useless. Those evades, Backstabs and Sneak Attacks are simply not enough to do the job. Heck she definitely needs at least 1 arcane slot. Maybe consider running 1 Incantation instead? That could be better... — matt88 · 2548 8/13/18
Counting on drawing multiple copies of so many cards seems unwise. — CaiusDrewart · 2732 8/15/18
This would turn Skulls into +1s for Jim Culver. So in campaigns where there are usually two Skulls in the bag, that is a very huge deal imo. — majer3raistlin · 22 8/23/18
But how often do you account for the +1 on a check? It actually Worse on Jim than anybody else in my opinion, he's already treating them as 0's and you rarely attempt a check to begin with if you cant beat 0. — Tsuruki23 · 2255 8/26/18
The +1 for Jim is less about attempting a check and hoping for +1 and more about Mythos odds. It can also help if you are running a card like Scavenging where you want to succeed by 2. Much easier to succeed by 2 with extra +1 in the bag. — Time4Tiddy · 198 9/20/20