You can never be too prepared.
Vincent Dutrait
Кров на вівтарі #194. 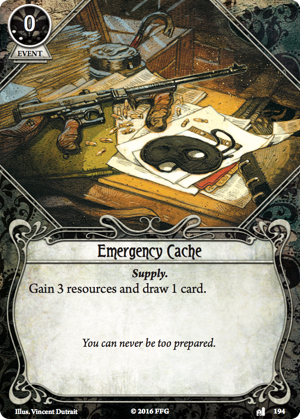 As Synisill remarked in his review, this card does not see a lot of play. Why is that? Certainly, the level 0 Emergency Cache is a pretty playable card. It provides useful resource acceleration, which lets investigators get expensive cards into play much more quickly by sparing you the need to use multiple "take a resource" actions. Some investigators have access to superior cards for this role (e.g. Mystics with Uncage the Soul), but for a lot of investigators, Emergency Cache is still the best level 0 resource acceleration available.

The second reason, and the more critical one, is that paying two XP for +1 card is a lousy deal. This is because, at this point in this game's development, every investigator has access to a huge number of cards that can simply trounce that. Take Beat Cop II. That's also 2 XP. Compared to its level 0 version, you basically get two successful Fight actions that you can use whenever you want. A successful action is much more valuable than a card, and Beat Cop II gives you two of them! Or take Pickpocketing II. You get the Fast keyword, which is almost always better than +1 card (consider that you can use the action saved to draw a card, if you want to), and you get a substantially more powerful effect. Or Deduction II, which gives you +1 clue (and +1 to a skill test). Again, far superior to +1 card.

And, of course, spending 2 XP on a measly +1 card will also slow down your progress toward the high-XP game-changers--you know, the stuff like Lightning Gun, Key of Ys, Shrivelling V, and Will to Survive--the cards that can just dominate scenarios. Those cards are absolute bombs, and there is no way that a slightly more efficient Emergency Cache is going to justify delaying them.

I won't list all the XP options that trounce Emergency Cache II in terms of efficiency because it would just be a list of most of the XP cards in the game. The fact is that spending two XP for +1 card is simply behind the curve. XP is precious and immensely powerful in this game, and spending two to get an additional draw isn't worth it.

The basic version of Emergency Cache is included in a majority of decks. There must be a reason why the upgrade has to be searched with magnifying glasses, it is rarely included by Arkhamdb players.

Considerations about the value of this card are found under the basic version of Emergency Cache(0).

The cost of 2xp have to be put into relation to the additional effect that the upgraded version gives you.

Which is... "Draw 1 card." I still do not think that this effect is worth the additional 1xp. I just wonder about people who include Lucky!(2) during the course of a campaign but not Emergency Cache(2). Or why it is not found more frequently in Roland Banks decks. This investigator is so beggarly, he can use a cash injection at any time during a scenario and would be thankful for the extra card!

For Roland, Emergency Cache(2) has the same power level as Police Badge(2) or even Beat Cop(2).

Synisill · 765
Not only exp but also action should be considered. Lucky takes 0 action this takes 1. One action is a card and a resource. This card only gives you a new card and 3 resource. So in total you use 1 card for 2 resources. — Halcyon Murphy · 14 7/27/17
You need Emergency Caches if you have several expensive cards in your deck and few other ways of gaining resources. It's not a great card (not even this upgraded version), but it's better than the alternative - spending actions on +1 resources per. — olahren · 1872 7/31/17
0

Sorry, not a review but a question: Where did this card come from? I can't seem to find it in my core sets? Edit: I see this card is no longer being displayed in the coreset list and has been moved to blood on the altar :)

mystery · 1
Then you've suffered a manufacturing defect and you should contact FFG and get them to send you copies. It's a core set card. — FarCryFromHuman · 1 12/23/16
No, this is not a core set card, this is the "exp" version which comes out in Blood on the Altar expansion. — Dreamspoiler · 1 12/23/16