Spend 1 charge: Investigate. Investigate using instead of . You get +2 for this test. If successful, you discover 2 additional clues at this location. If a , , , , or symbol is revealed during this test, after this test resolves lose all remaining actions and immediately end your turn. 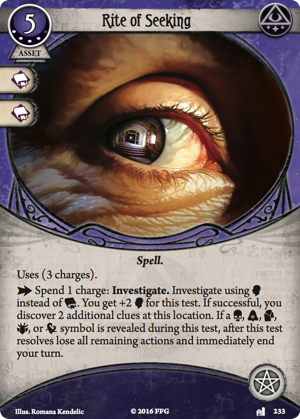 I wanted to write a short but glowing review of my second-favorite Mystic card. I'm going to focus here on 3-and-4-player, because that's where Rite of Seeking really shines. (Though this card is certainly playable in 2-player, too.)

I think some people are scared off by the 5-resource and 4-XP commitment. I'm writing this to say: don't be, at least not in a high-player-count game. This card is expensive, yes, but it has a strong tendency to totally crush scenarios. Clues are how you win the game, and repeatedly clearing whole locations in a single action is amazingly powerful.

You can think of this card as turning 1 card, 5 resources, and 4 actions into 9 clues. That's really, really good. Of course, you need to pass 3 skill tests to get that result. But since most Mystics have naturally high Willpower, build their decks to crank that Willpower up even further, and get a further +2 from this card, passing those tests is rarely hard, even on Expert. Plus, Mystics have an abundance of cards that can eliminate the possibility for bad luck--Grotesque Statue and Time Warp are two particularly effective ways to combat the Autofail token and go great with this card.

Even if you only succeed on two out of three tests (and with proper precautions, you will usually do better than that), getting six clues from this card is still respectable.

It is important to play around that special token drawback, but it's usually not too hard to do that. Just investigate for your last action. The key here is planning your turns ahead of time so you can do useful things with your first two actions before you Rite of Seek. More often than not you need to move before you investigate, anyway, so that's one useful action accounted for there. I have rarely found this to be a significant drawback. If you find yourself urgently needing to investigate earlier in your turn, which is pretty rare, the aforementioned Grotesque Statue can help.

Arcane Research and Delve Too Deep are highly recommended. I think this card would still be worth it even if you weren't running those XP accelerants, but it's certainly better if you can purchase this card earlier in the campaign and support it with other XP cards. Uncage the Soul and Emergency Cache are good for helping you get both this and Shrivelling into play in a timely manner--should you be fortunate enough to draw both. Arcane Initiate is useful for making that happen.

As awesome as this card is, I don't think this is necessarily the highest XP priority for Mystics: if your party is light on combat, the upgraded Shrivelling is surely more important. But it's way up there for me, and in an investigation-light party I could see going for it very early.

And don't even get me started on this card in Akachi, where it naturally has 4 charges...

Rite of Seeking (4) is unusual in that it is one of the few cards to grow more expensive when upgraded. However, it is certainly worth the cost. One danger of the previous Rite of Seeking was the waste of a valuable charge on a failed check. With the (+2) built into the upgrade Rite of Seeking this is far less of an issue. Furthermore, gaining two additional clues instead of one is a sizable gain, further compressing actions. On the other hand, it is near useful in solo play as rarely will locations have three clues on them.