One ant is a nuisance. A colony is another matter.
Guillaume Ducos
Heart of the Elders #221. Pillars of Judgment #11-13. 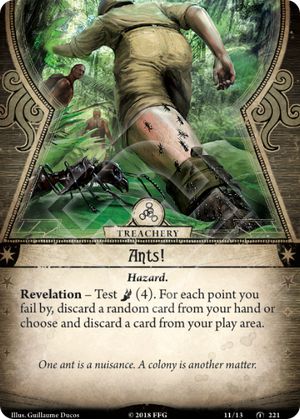 Seeing answers in Terrible Secret and Crisis of Faith it seems people want to resolve the whole revelation effect before applying the result so one card can deny the whole iterative cycle. But with the same logic here can you choice to discard four cards at random when you have only one, but plenty of assets. As that choose will still change the game state and as such should be a legal option?

The main question being if you have a revelation effect on a treachery card that has a for each statement. Do you resolve it step by step or as one effect at the end?

iro · 5
If I understand your question, you resolve any test, then apply the results as a group -- so, with Ants!, if you fail the test by 2, you could choose to discard 2 cards from your hand, then play Dent Existance to cancel that effect (ie discarding cards from your hand). Similarly, with Crisis of Faith, you could choose to take (say) 4 horror, and play I've Had Worse (4) to cancel all 4 and get 4 resources. I don't think you can do anything to Terrible Secret; I think that "Cannot be cancelled" applies to both the card and its effects; it is a weakness for the Queen of Cancellation, after all.. — LivefromBenefitSt · 885 10/19/20
About Terrible Secret, cancellation like Dark Insight wouldn't work. But Deny Existence can, cause its text says "ignore", not cancell. These are two different effects, mentioned separately on Diana's IC. Mostly they do the same thing, though. — Secutor145 · 3 10/19/20
You resolve it all at once: ‘for each’ effects occur simultaneously, so you would first decide how many of each effect and then resolve them. You can’t chose to discard more cards than you can from hand. — Death by Chocolate · 1105 10/19/20
Thanks for the answers! :) For future reference can this be deducted by any excerpt from the rulebook? — iro · 5 10/19/20
Actually, wait --- this card doesn't say "must" unlike most treacheries, so presumably you *can* in fact choose an option that doesn't have the potential to change the game state. — Thatwasademo · 42 10/20/20
Which would mean, if I'm reading it correctly, that even if you *start with* 0 cards in hand or 0 cards in play you can avoid doing anything from failing this test... — Thatwasademo · 42 10/20/20
(see "Must", rr., naturally) — Thatwasademo · 42 10/20/20
You cannot "choose and discard a card from your play area" if there is no card in your play area, since "choose" requires a valid target. But yes to discarding from hand with an empty hand. — Yenreb · 15 10/21/20
(or if the only cards in your play area are not valid targets, such as Permanents or Sophie; in those cases your remaining failure points must be hand-discards. See the rules for 'Target'.) — Yenreb · 15 10/21/20
@Secutor145: Deny Existence can cancel the horror from Terrible Secret, but I'm pretty sure it's because Cancelling the horror from Terrible Secret doesn't require actually cancelling terrible secret. As far as I'm aware, there is no real difference between Cancelling and Ignoring in AHLCG. — Zinjanthropus · 199 10/23/20
Nope, it’s entirely because TS says you cant cancel, and Deny says you ignore. The distinction actually does matter. — StyxTBeuford · 12690 10/23/20