Eye of the Djinn
Vessel of Good and Evil

Alexandre Honoré
A Light in the Fog #225. 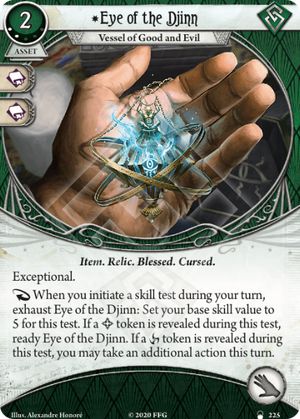 This card is great for a certain millionaire. His hand slots are typically free, only really used for flashlights, key rings, or fire axes. He can’t take any of the fun illicit weapons that rogues have. But with this, you can nail one more skill test a turn. And with survivor access, he has multiple ways to fill the bag with positive tokens, and Faustian bargain already works with him to supply his teammates with cash. It even upgrades easily in your deck, you can replace trial by fire guilt-free.

MrGoldbee · 1174
Its also great for Father Mateo, who can have it in his starting deck, and can also run Priest of Two Faiths and Tempt Fate to buff both this and his Paradoxical Covenant. — The_Wall · 243 12/16/20
I think mateo dont want to run this card from begining but yea I can see it being very strong card for him(there are better cards to have for him at begining). I can imagine it being first card he put into his deck ofcourse — Makaramus · 4 1/22/21
3

One crazy interaction that exists is with Skid's parallel ability. Instead of testing at base 3 you can increase that number to 5 since the Djinn doesn't specify which skill test type it has to be. On standard and easy this means you can gamble 1 resource and all but guarantee a resource every turn barring the tentacles. If you actually commit cards, it gets even crazier.

Also, a question: Can you use this during the Mythos phase? It says "during your turn" so I'm not entirely sure.

Darvete · 358
There are no player turns during the mythos phase, so the eye can't be used then. — TheNameWasTaken · 3 3/3/21
There are some rogue cards that let you take an action as if your turn, but these are are after the test initiation on Mythos cards. — Django · 3892 3/3/21
It's actually pretty incredible with the favors, because you can basically just get yourself a free action and unexhaust the eye of the djinn. Lair of Dagon cannot come soon enough! — Zinjanthropus · 192 3/5/21
3

Even if you're not using or mechanics, Eye of the Djinn is a pretty cool card.

At worst this is a 1/turn buff that takes one skill to 5, generally a buff of +2 or more, nearly a Physical Training except it goes for all the stats. It's a great way to brute force scenario-specific tests (for example Parlay's, which usually ask for , not a strong suite), use it to force a clutch evade or an elusive clue, land an event like Followed or Slip Away. This thing does brick a good slot, but the bonus you gain especially with XP allies in place lets you hit really impressive numbers to snag some clues and hit some punches.

So, at the steep cost of 4 xp, I've probably established that this is a perfectly playable card, but here's the kicker, if anybody is playing either or both of or , this thing may get a heap better. More actions, more bonuses! It's a bit unpredictable (actually, it's very unpredictable!) but bonuses, are bonuses! the dependability of the base card is'nt made any worse by the unpredictability of the random boosts. Go with the flow, and if it's boosts you want, grab Favor of the Moon and/or Favor of the Sun and just brute force the bonuses whenever you like!

On the note of Eye of the Djinn and Favor of the Moon specifically, you can actually simultaneously generate bonus actions and resources under controlled circumstances, testing something like a 1-shroud location for clues while speeding yourself up, "Skids" O'Toole's paralell money generation test, the test on Liquid Courage. That's really rather epic!

The only real reasons not to play this card in a deck, is the hand slot and 4XP, both of which are steep prices for a 1-off card, 1-off's allways run that risk of not showing up in a scenario, you might have filled your hand slots at that time, and if Eye of the Djinn shows up in the last few turns of a game, like drawing a Physical Training or similar value-generating cards, it's just too late.

Tsuruki23 · 2150
It's pretty good even with just Olive McBride, though the Favors take it to a whole other level. It's also pretty wild in parallel Skids. Use it with favors on his zappyboi to net actions. He has really good generation for both bless and curse as well. — Zinjanthropus · 192 4/7/21
3

Who can use this

Should you take for the base skill value 5 effect alone?

Every turn for no cost you get a skill test on your turn at base 5! That will often amount to a minimum of an Unexpected Courage on a secondary stat, and even boosting a primary stat from 4 to 5 isn't terrible.

Even in a highly specialised investigator who already has a base 5 in their core stat regularly is required to take tests that they don't excel at, e.g.

If you start to build around the effect then it only becomes better. It's powerful, flexible, cheap and requires a little build around to be good.

So most investigators would want the effect but should they all take this? No, the biggest downside is that it takes up a hand slot, and for most investigators that can take this hand slots are in short supply, especially for primary fighters they're often taken up with weapons.

However for the investigators that can often spare a hand slot and have weak stats or weak secondary stats this card is already looking very appealing. The most obvious candidates that fulfill these critera are Dexter Drake, Jenny Barnes and of course Preston Fairmont.

Should you take for the bless / curse effect?

OK, so for some investigators the base 5 effect is great, for others it's merely OK. But we've not considered 2/3 of the text on the card yet... so let's do that!

If you're starting Dunwich on standard you'll have 15 tokens in the bag. Then if you've stuffed the bag full of blesses and curses you have:

That's over a 50% chance of getting another powerful effect, and sometimes you'll get both!

In class Rogues can either generate curse tokens with:

can generate bless token with

or can generate both simultaneously with the neutral:

If you are considering taking these cards anyway then great, but they are unlikely to be worth taking to solely to trigger the bonus effect on Djinn alone. If you or your teammates are already planning to fill up the bag with with bless and/or curse tokens anyway then the effect from the Djinn is a strong bonus.

OK if you're only taking / generation for this effect. Excellent if you already have / generation.

What if we get full value out of it?

Lets put this card in Preston Fairmont where:

Now combo alongside Favor of the Sun and some bless generation and now we get:

Now add in Ancient Covenant and we get:

that's 1 will to survive + 5 unexpected courages every turn!!

Even if your Preston Fairmont deck is completely built around buying your way through the game and skipping the chaos bag all together you're still regularly going to be able to find uses for this effect. As well as all the basic actions and encounter card tests mentioned earliey you can start using your base 5 on tests on impactful event cards such as Pilfer or Backstab even though otherwise you wouldn't have the base stats to support them.

Combos with Favor of the Moon are also possible to reliably trigger extra actions which is also strong, but ensuring a testless action is the most powerful. This is because in Rogue you also have a vast array of sucess and over success mechanics. As you've got a testless action each turn at base 7 you can commit all your over success cards with completely certainty of the result. You can trigger Quick Thinking, "Watch this!", Lucky Cigarette Case etc. for huge (and 100% safe) combo plays. See my Preston decklist for an example of what's possible from just 8xp.

The combo in Preston Fairmont of Eye of the Djinn + Favor of the Sun + Ancient Covenant is absolutely broken and triviliazes the game even on expert.

When this card was first announced everyone was quick to say it was broken, but I think the truth is that it's trying to give you an almost guaranteed success.

Your base skill is 5, which is great. But what if you draw a bless token? You probably just wasted your Eye of the Djinn on a test you were going to succeed on anywa-- oh wait! You can ready the Eye of the Djinn and get the bonus again next test.

I think this card is great. Even without a blessed or cursed package, it acts as a plus 2 or 3 every single turn. That alone is worth a handslot at cost 2, and it synergies with other increases given this affects base stat. Works great for over suceed rogue. I've used in Wendy Adams and it allows her to punch cultists - a huge resource save and allows her to do things that she normally can't. That situation is probably the biggest benefit - allowing investigators to do things they can't normally so each turn - pass head tests, attack, investigate. Amazing versitility!

Adamgoff159 · 2
Without a blurse package, this would be quite expensive as a +2/+3 once per round; compare the slotless 1/round stat boosters aka High Roller/Well Connected and the like. It also works poorly for stats that you're already good at. In true solo, the versatility will be still worth the price even without blurses, but in multiplayer specialization generally is more useful. — suika · 8292 2/26/21
I also think this is great, especially to boost will. Many rogues have low will and fear rotting remains and such. The eye is a great solution to that. You can only have 1 in your deck but backpack (2) will help you find it. — Django · 3892 2/26/21
@Django Eye of Djinn doens't work work in the mythos phase, so it won't help against Rotting Remains and the like. It will work for Will treacheries that require tests during your turn though. — suika · 8292 2/26/21
1

It's worth noting this is pretty good in the hands of Sefina Rousseau and Dexter Drake, particularly when running any of the hybrid Mystic events out of The Dream Eaters cycle: Spectral Razor, Ethereal Form, and Read the Signs.

These events test the base // of the associated Fight, Evade, and Investigate actions, adding your Will on top of them. With the Eye modifying that base, this lets Sefina and Drake test at 9 and 10, respectively, when using these events.

Both also have access to some methods for adding to the chaos bag (ex. Faustian Bargain) and a strong temptation to run Leo as an ally for bonus actions, making occasional the trigger appealing to them.