Play only if you have at least 1 clue.

Choose an investigator at your location. That investigator either heals 2 horror or discards a Terror card from his or her threat area.

"I am the wisest man alive, for I know one thing, and that is that I know nothing."
- Plato, The Republic
Andreas Zafiratos
A Phantom of Truth #191. 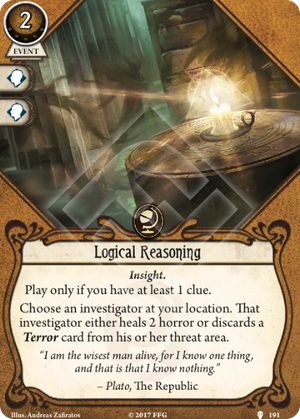 I want to briefly sing the praises of this workhorse card. While it's more expensive sibling Logical Reasoning (4) never quite seems to live up to its 4 XP cost, the humble level-0 version is a must include in any Seeker deck where you are paired with a low investigator. You might find the 2 horror healing or 2 icons useful for yourself, but that ability to top up your friend's shaky Sanity or clear a Terror that is hamstringing them is invaluable, always assuming you can keep a clue on hand.

It obviously only works on Terrors in threat areas, which leaves out a lot of nasty cards, but the valid targets are well worth targeting.

There are others, but they are Hidden, so, while you can use Logical Reasoning to clear them on yourself, you can't help partners. This card just keeps getting more useful as more Terrors get released. It would be nice to have a Blessed version to do something similar for Hexes and/or Curses, which also hang around and make you miserable.

LivefromBenefitSt · 887
First, while your Hidden cards ARE considered to be in your threat area, this still can’t discard them due to the special rules that Hidden cards ‘cannot be discarded from your hand by any means except those described on the card’. Also the Blessed card you describe does exist: it’s called Alter Fate. :) — Death by Chocolate · 1131 9/27/20
Oh, yes; I forget that. Wouldn't want us to discard a Law of 'Ygiroth without doing some janky discard, would you, Arkham? — LivefromBenefitSt · 887 9/27/20
This is a pretty handy card to have in City of Archives for a variety of reasons. Especially for Ursula. — Zinjanthropus · 205 9/28/20
4

I just used Logical Reasoning with Roland Banks in a run-through of the Night of the Zealot, and I was moderately impressed. The ability to heal 2 horror is more important to him any of the current seekers, and there aren't that many options for healing horror. Combined with double Willpower icons - which I found I used - it's pretty handy.

Probably the closest equivalent I could find was Moment of Respite, which costs 3 to heal three horror and draws a card - but requires 3XP. Compared to it, Logical Reasoning is 'Moment of Respite Lite', with the lower XP cost being the only real advantage.

The other part of the effects - remove a Terror card - is possibly occasionally useful, but at the moment there are relatively few Terror cards that go into a players threat area. Delusions and Striking Fear are the only relevant encounter sets at the moment, and all Delusions can be 'paid off' with 2 actions. Logical Reasoning is 1 action and 2 resources, so it's not a great bargain. It's decent against 'Frozen in Fear', but I wouldn't pick a card to counteract 1 encounter card.

I would say, don't underestimate the cost and conditions. 2 isn't exactly cheap (at least, for guardians who seem to have plenty of expensive cards), and you do need a clue too. You might not always have one. (Been there, done that).

In summary, reasonably impressed with this for Roland as a starting card to beef up his lacklustre sanity. With XP there are better options. I've taken to thinking of it as a better alternative to Guts for him, trading draw for, potentially, healing horror.

Other investigators? Well, seekers usually have better sanity anyway. Minh Thi Phan might have a use for it, and the Dunwich investigators can all take it as a splash card - though, to be honest, there are better choices, I think.

AndyB · 899
Its also incredible tech for parties, as its probably the next best thing besides rogues booze to heal horror. "Choose an investigator at y — MURdos · 167 12/28/17
It is an auto include for multiplayer. Your monster Hunter will love being able to heal the horror. — Myriad · 1134 12/31/17
I usually take this in Ursula instead of Guts for treachery protection. Almost never actually play it (just commit it for icons), but every now and then you get turned into a Yithian and it gets way harder to investigate a new location every turn. It's also a good support card in multiplayer or two-handed. — Zinjanthropus · 205 4/26/20
2

This seems like the horror-related alternative to Emergency Aid. It's 2 resources, a card, and an action to heal 2 horror instead of 2 damage. Both cards each have one extra use - Emergency Aid has the ability to heal allies and Logical Reasoning is able to remove a Terror. Logical Reasoning does also require a clue to use, but in my experience this has not been a largely prohibitive restriction.

Part of it might be that I find horror to be more common than damage in the campaigns I have played (Night of the Zealot, The Dunwich Legacy, The Path to Carcosa) but I normally find the horror healing to be quite useful. In general, soaking horror is better than healing, but sometimes things go a little south and get a little crazier than you expected. In those moments, I am glad I have this card around.

Even if you don't want this card for yourself, take it for one of your friends if you're playing multiplayer! Your Guardian will thank you and will hopefully pay you back by keeping you protected from scary enemies.

As of The Depths of Yoth, I would say that this card is still a logical choice for many investigators!

ArkhamInvestigator · 275
I play seeker quite often in multiplayer, and almost always take this card. With two willpower icons on it, in addition to everything you just said, this has NEVER been a dead card in my hand! — cb42 · 32 10/18/18