Uses (1 charge). Replenish this charge at the start of each round.

You may resolve abilities on Spell assets in your hand by revealing them from your hand. Treat True Magick as if it were the revealed asset (to pay its costs, spend charges, perfom its effect, etc). 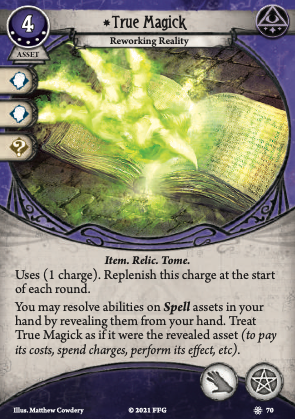 Bear with me here, because this is going to get weird and as we all know "as if" invites all sorts of weird interactions (looking at you Luke) so I may get some things wrong here. This is simply a list of weird points I've noticed while looking at this card.

Armageddon, Eye of Chaos, and Shroud of Shadows in your hand could let you replenish the charge on True Magick or get the other effect (damage, clues, movement) when you pull a token.

Sixth Sense and Wither don't use charges but are still viable choices for True Magick so you can use them twice a turn and still have a charge left for something else.

True Magick doesn't specifically say "action abilities" so that should allow investigators to use and abilities. Arcane Insight, Obfuscation, and Suggestion all should work fine.

You can also save on a hand slot with Enchanted Bow if you feel like it.

Feed the Mind and it's upgrade don't work because charges =/= secrets.

As I understand it, "Seal ( )" isn't an ability but an additional cost to playing the card, so no cheating Seal of the Seventh Sign. But if you wanted to run them together, I THINK since True Magick says you MAY resolve the abilities by revealing them you don't really have to reveal the Seal you can just ignore the forced effect while it's in your hand, but I think you COULD if you wanted to? Dunno.

"Seal ( )" might not be an ability, but Shards of the Void really doesn't care since it also has "seal" in the ability. "As if" so... You seal the 0 on True Magick? Then activating it again you can release the 0? Oh, and if that works the way I described, couldn't you just also use True Magick as Shield of Faith? Not sure if that would discard True Magick or not.

This is getting weird, I'd better stop while I've still got 1 sanity left.

To me True Magick means efficiency, you don't need to play a spell for a 1 or 2 odd uses only to toss it away. You can keep a Shrivelling in your back pocket to pick off 1-2 health enemies all game, then actually play it before the final boss fight. It's a bit of a flavor fail that Dexter Drake doesn't mind tossing his spells around and would like this card a lot less than some other Mystics, especially ones with 5 free XP at the start.

That is, what Sign Magick is made for. You may have only one charge for charge spells (which can be refilled with Twila Katherine Price) but you can activate Wither / Wither or Sixth Sense / Sixth Sense without the need of charges.

So keep spells in your hand. You cast from your book. Quite cheap and effective.

GrueneLupenAufheben · 69
Except that you explicitly treat ‘True Magic’ as the asset. Which means that you can’t then trigger True Magic with Sign Magic because it isn’t a ‘different’ asset under your control. — Death by Chocolate · 1170 10/11/21
I'm not sure what Gruene was looking for, but my playgroup believes you _can_ use Sign Magick -> True Magick to activate _two different_ assets in your hand, because the True Magick is being treated as two different assets for the purpose of Sign. The question is whether the game can "keep track" of only a single asset in your hand to allow you use Sign -> True if you only have a single copy of Sixth Sense in your hand... — slyguavas · 39 11/1/21
That's what I meant. I can "switch" witch spell asset on my hand True Magick represents... Even between first use of a spell and activation of Sign Magick. I would not say, that you can use one copy of a spell asset in your hand twice with Sign Magick / True Magick. — GrueneLupenAufheben · 69 11/2/21
I don't think you count as controlling spells that are in your hand. — Firerunner · 1 11/5/21
Yay for auto-submit on enter. From the rulebook on abilities: - Card abilities only interact with the game if the card bearing the ability is in play, unless the ability (or rules for the cardtype) specifically references its use from an out-of-play area. - Card abilities only interact with other cards that are in play, unless the ability specifically references an interaction with cards in an out-of-play area. Sign Magick can only target spells you control. While True Magick allows you to activate abilities, I don't believe you control the card. (Which is why you are allowed to use charges etc in its place) — Firerunner · 1 11/5/21
Does anyone know how this card interact with Twila Katherine Price? Twila refunds the charge you spend on a SPELL asset, but True Magick does not have that trait. However, we get to treat it as if it were the revealed spell asset from our hand. So does Twila refund the charge you spend on True Magick? — max07 · 1 1/9/22
Do you gain a charge each round even if this already has one or more charges on it? — Runic · 1 1/14/22
@Runic No, "replenish" is different to "place". You only get a new charge of you spent the the one it initially gave you. — joguitarist · 1 3/2/22
@max07 regarding Twila Katherine Price, I don't think she works for True Magick, as it is not a SPELL asset. You can treat it as the revealed asset to resolve the ability, but TKP is a reaction that occurs separately in my opinion. Although the rather unhelpful word "etc" at the end of the card text means I could understand if the designers intended or to work either way. Needs an FAQ probably, as my group can't agree! — joguitarist · 1 3/2/22
I have had a reply from the the FFG rules query form: "The way that True Magick works is that it essentially becomes that Spell card for the duration of its ability. Because of this, you could activate Twila Katherine Price while True Magick is being treated as that Spell card, and a charge could be placed on it." — joguitarist · 1 5/19/22
1

True Magick doesn't work with Seal of the Seventh Sign.

The Seal keyword is stated as "As an additional cost for a card with the seal keyword to enter play, its controller must search the chaos bag for the specified chaos token and place it on top of the card, thereby sealing it."

True Magick's ability is "Treat True Magick as if it were the revealed asset".

Hence, if you try using True Magick on Seal of the Seventh Sign, the card does not "enter play" because True Magick is already in play and thus no token is sealed.

kongieieie · 11
Not using them together is good advice, but it is not actually true that they 'don't work together.' (I wouldn't recommend it though...) Forced abilities are abilities so you may choose to reveal Seal of the Seventh Sign when somebody reveals a spooky token from the chaos bag in order to remove a charge from True Magick. (Again, not recommended, but technically legal.) — Death by Chocolate · 1170 6/7/22
There is no reason why true magic should not work with seal of the seventh sign. According to the "as if..." rule true magic becomes technically the seal of the seventh sign with one charge until all effects are resolved (including the removal from game) — Tharzax · 1 6/8/22
@Tharzax, there are four abilities on Seal of the Seventh Sign: two keyword abilities — that resolve when it enters play, a constant ability — the sentence about removing it from the game, and a Forced ability. True Magick is treated as a copy of a spell in your hand throughout the resolution of an ability on it, but there is no way to resolve the Seal ability as long as no card is entering play. — Spritz · 66 6/8/22
Incidentally though, you can make an argument that the timing of the Seal keyword must be such that, if you play True Magick with 7th Sign in your hand, you can seal the Autofail. Should you make that argument? Probably not. — Spritz · 66 6/8/22
@Spritz I don't think you can make that last argument because True Magick's constant ability isn't active until it is in play, at which point it is too late to resolve Seal (which it would need to already have as it is trying to enter play). — Death by Chocolate · 1170 6/8/22
There's a problem in that (non-deckbuilding) keywords shouldn't be active until the card they're on is in play either — and it's arguably relevant that additional costs can be paid outside the normal timing. But I agree that it should be ruled the way you describe. — Spritz · 66 6/9/22
You could argue that if you choice the sign with true magic the card switches from an out of play area to a play area. But nevertheless if it work or not I think you shouldn't waste true magic in this way — Tharzax · 1 6/9/22
@Spritz That ("non-deckbuilding keywords shouldn't be active until the card they're on is in play") is objectively wrong. See: Fast. — Death by Chocolate · 1170 6/10/22
The rule I think was being misinterpreted is (from "Ability") "Card abilities only interact with the game if the card bearing the ability is in play, unless the ability (or rules for the cardtype) specifically references its use from an out-of-play area." But the definition of the Seal keyword specifies "as an additional cost to put this card into play", which suffices to meet that requirement. — Thatwasademo · 43 6/10/22
That said, True Magick's constant ability to resolve abilities on Spell assets can't work at the time Seal needs to, so the only abilities you could copy from Seal of the Seventh Sign are its forced effect to remove a charge from True Magick and its constant ability to remove True Magick from the game. — Thatwasademo · 43 6/10/22
You Definition of seal is not correct in the rules is written that you seal the token if it enters play not if is put into play. Als look at the description of a card enter playing:it just need to change from an out of play area (hand) to the play area. For me the as if condition on true magic fulfill this requirement. — Tharzax · 1 6/13/22
https://arkhamdb.com/rules#Seal — Thatwasademo · 43 6/13/22
It says if a card enters play and gladly there also a rule entry for this wording: https://arkhamdb.com/rules#Enters_Play . Does it work with true magic? Loook at the rule for "as if": https://arkhamdb.com/rules#As_If . I think if i use the as if ability of true magic i have to treat it like the card in my hand in all aspekts which also includes a sudden appearance in an ingame area from my hand. This meets the requirement of the rule for cards to enter play and therfore to seal tokens. — Tharzax · 1 6/14/22
You can be engaged without ever engaging (see massive enemies and Zoey's cross), so you can also be in play without ever entering play. — Nils · 1 6/15/22
I think that this cases rather depends on the fact that the engagement is never fully solved, since the massive enemy don't enter your threat-area. Also you're "consider" to be engaged. For me the ruling for "as if" is more direct (I think there is also some time between both cases). Probably try to change the rule for massive enemies so it becomes an as if condition. — Tharzax · 1 6/15/22