You have 1 additional hand slot, which can only be used to hold a Weapon asset. 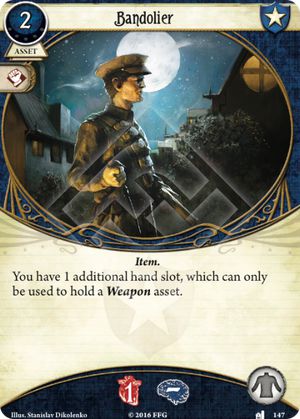 Bandolier can be used by:

I think this card has received inappropriate disdain and mostly overlooked, wrongly in my opinion. In fact, Bandolier (0) is a quite solid card.

When looking at this card, one would probably think "why would I want an additional hand slot? I already have my guns!". Well, guardians love spending their experience points in two-handed weapons such as the Lightning Gun, the Shotgun, or the M1918 BAR. The problem becomes quickly apparent when playing regularly with these weapons: you will either have to use your precious ammo on trash mobs (and be empty when the nasty guys spawn), or you will need to refrain from playing your big weapon as much as possible, meaning that the turn you will need it, you will:

The more the player count, the more enemies will spawn, and the more you will need to use backup weapons to be able to keep up with the killing. Even if you keep your Shotgun for when the big baddy spawns, several scenarios throw so many hard enemies at you that you'd wish you didn't discard your Machete. On a side note for solo, though there are much less enemies, you probably want to keep running a Flashlight during the scenario, and Bandolier once again helps you for this.

In other words, Bandolier (0) will maybe not shine in your 0XP deck, but it is an investment that will pay off as soon as you upgrade a two handed weapon. Conversely, I don't think Bandolier (2) is that much of a good card because 2 additional hand slots is just overkill, though the +1 is nice.

One real issue is the severe indirect nerfed it received recently due to the introduction of the Flamethrower, arguably the best weapon in game. Though the body slot necessary for Bandolier (0) used to be mostly irrelevant due to the thin competition for that slot, Flamethrower changed this. Obviously, you may still prefer the Lightning Gun, with which Bandolier stays relevant.

As for non guardians as well as Carolyn Fern, Bandolier (0) is a more dubious card. Except "Skids" O'Toole, who may really like having an additionnal hand slot if he plays Chicago Typewriter or Ornate Bow, other investigators should probably skip this card.

Alleria · 105
I agree with your individual points to an extent, but bandoliers in a level 0 deck is so incredibly bad. In terms of star alignment, you need three hand assets and the bandolier - especially in a guardian deck where you probably don’t have the economy to pay for that, it’s pretty rough. Of course the 2h weapons are a game changer, but I would rather pay 4xp to add the bandoliers when they are useful than save the xp to have dead cards for ~3 scenarios. — Death by Chocolate · 1131 1/29/19
This in a L0 Guardian deck is like the "research required" cards in a L0 Seeker deck. You're really taking it for what it can do down the road. Until it's great, it'll only really provide a single health if played, or one combat icon if committed. — cb42 · 32 1/30/19
Additional problems with this card (and why i try to avoid it): The card by itself does nothing, as does the asset you'd like to stick on it, when your big gun is out. It costs ressources, an action and deck slots but most guardians are often starved in all those aspects. — Django · 4140 1/31/19
Skids loves this, especially at level 2. Gives him the hands to utilize Thompson/Typewriter without giving up tools, and also helps cover his crappy Willpower. — Amante · 4 7/13/19
I could see this being effective on Jenny Barns. Using Twin .45s and flashlight would allow her to investigate and attack. Otherwise I feel stuck just fighting once I use the .45s — AbdulaOblongata · 1 2/19/21
Bandolier (2) should give extra ammunition or something like that. Or possibly a quick draw free action that exhausts. — PrecariousSleuth · 8 11/28/21
2

I think it is best to think of this card as an extra hand slot for most characters instead of 'just' for weapon. That way it doesn't make you feel like it is meant to hold extra weapons in your analysis. For instance, Zoe with a Machete can now hold a Flashlight and Ritual Candles in her hand.

Will you sac this for health? Maybe, but only if your low and the guardians typically dont need this stat boosted. This card seems somewhat mediocre to me.

Bronze · 164
This card is pretty terrible in my opinion as you have to draw cards in the right order. Lots of hand cards and no Bandolier? Bad. Bandolier but only 2 hand items? Waste. If it were free, it might be worth considering, but at 2 cost, no. As it stands now there just aren't any "killer combos" you need an extra hand for to make all the downsides worth it. — waferthinninja · 656 4/11/17
I think this is useful for investigators planning on using two handed weapons (e.g. Shotgun, Jenny's Twin .45's). You usually don't want to play those "big guns" early, so waiting for the Bandolier isn't as big of a deal. — TaranWanderer · 1 4/21/17
It does specifically say its for a Weapon asset though, so I don't think your scenario with Zoe works does it? I'm pretty new, so I'm always happy to be wrong — TheRZM · 1 8/3/17
Zoey holds a Flashlight and a Ritual Candles, and a Machete in the extra spot. — bricklebrite · 374 8/13/17
I really think it should've been cheaper. I think 1 Resource would've been fair, but 2? Ehhh... And taking up the Body slot too? Ouch. — ArkhamArkhanist · 4 9/5/18
Become a lot better in the recent meta in my opinion. With prepared for the worst, stick to the plan, a lightning gun and a machete my guardians can reliably despatch weak and tough enemies alike as efficiently as possible. At least by the mid point of a campaign — NarkasisBroon · 9 1/4/19
2-hander + backup weapon. No good with flamethrower, but makes perfect sense with any other dedicated killing-machine setup. I like this on Yorrick a whole lot. Baseball Bat + Survival Knife, works great on him early. Baseball Bat + Timeworn Brand, later, is reliable azz-whooping. — crymoricus · 225 1/4/19
With Joe and his Detective Colts does this effectively grant him 5 hand slots, one — AnyoneForSnakeStew · 1 2/12/19
Sorry about that... I will now continue. So can Joe have his colts, an Ancient Stone and 2 tools? His is effectively using the extra hand slot from the bandolier for one of the two hands required for the colts? — AnyoneForSnakeStew · 1 2/12/19
My second post hasn't appeared so will try this again. My question is can Joe use this to have his Colt Detective 1911's, an Ancient Stone and two tools in play all at the same time? — AnyoneForSnakeStew · 1 2/12/19
Yeah, the requirement should be that you have a weapon in play, not that it can only be used for a weapon. That way the order doesn't matter. — PrecariousSleuth · 8 11/28/21
Better still, it should read that it attaches to a weapon. That weapon doesn't take up a hand slot. Personally though, that is basically how I interpret this card anyways. I am not going to play it in order. I assume they mean what I am saying; It requires that you have a weapon in play. — PrecariousSleuth · 8 11/28/21