You get +1 and +1 while resolving an ability on a treachery card.

After you succeed at a skill test while resolving an ability on a treachery card, exhaust Tooth of Eztli: Draw 1 card. 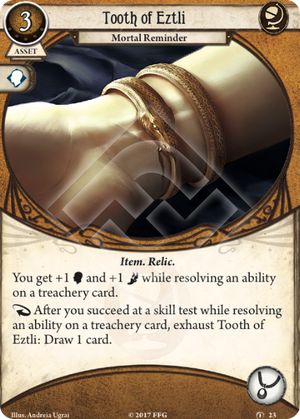 A really interesting card. How many Will or Agility tests can you realistically expect to draw in a given scenario? Well, people have done the math about this. In an excellent post, The Strange Solution calculates that skill tests collectively make up significantly less than half of all encounter cards. Skill tests feature in about 40% of encounter cards in Night of Zealot, 36% in The Dunwich Legacy, and 32% in the Path to Carcosa (the vast majority of these being Willpower or Agility tests, with a handful of Intellect tests thrown in).

This means, if we assume the player is not drawing extra encounter cards (from Delve Too Deep, Overzealous, the exploration deck, etc), the odds are that you will probably not get that many treacheries that involve skill tests. Roughly three to five such treacheries per scenario is a reasonable expectation--and that doesn't leave a lot of room for Tooth of Eztli to turn a big profit. If your scenarios are taking longer or extra encounter draws are a factor, that obviously changes things.

There is the further difficulty that, on high levels, you will often be failing the treachery tests anyway, even with Tooth of Eztli's bonus, and even if further resources are invested. On Expert, even a Higher Education/Hyperawareness/Tooth of Eztli Ursula, which is probably the ideal situation, won't be able to pass all of these tests; and if you fail, obviously, Tooth of Eztli isn't doing much for you. (Although there are a handful of treacheries, like Frozen in Fear, that will almost certainly give you a draw sooner or later.) Daisy and Norman, meanwhile, are going to have a really hard time taking advantage of Tooth of Eztli's draw on Agility checks. On lower levels, where you'll get more draws, and it is just generally a more viable strategy to try to pass treacheries, this card is more attractive.

Generally speaking, Seekers are pretty well positioned to ignore treacheries. The most common outcome of treacheries, by far, is that you take horror; but Seekers can often just ignore this, as they have naturally high Sanity pools (as well as good in-faction horror healing and horror soak if they need it). While Seekers have some nice assets they'd rather not lose, compared to the other four classes, Seekers are the least asset-dependent, and consequently the least afraid of things like Crypt Chill. Frozen in Fear is a terror to Guardians and Rogues; but for a Seeker with Pathfinder in play, it often makes literally no difference.

My instinct is that for solo Seekers, treacheries are generally the least of their worries. Spending a big chunk of resources on a card that provides a small boost against them, and maybe a bit of long-term economy down the road, just doesn't make a lot of sense--not when enemies are such a big threat. For multiplayer Seekers, who don't need to worry about monsters, this is more playable. But I suspect its benefits will end up being substantially less impactful than a lot of other expensive first-turn plays a Seeker could make--and if Tooth of Eztli is delayed past the first turn, it's even less likely to provide profit. Of course, the various synergies related to the Relic keyword (Unearth the Ancients, etc.) complicate things further.

CaiusDrewart · 1767
Seems like it would be a lot more useful on Roland? — HollowsHeart · 14 5/19/18
Maybe, but there are a few issues there. Roland is cash-strapped compared to the other Seekers (he absolutely requires both a weapon and an ally), so adding a 3-cost asset on top of that is tough. Moreover, Roland will fail a ton of the Agility and Will tests even with this bonus if the difficulty is high (remember that he doesn't have Higher Education to help boost things further.) He can't realistically expect many draws from this. — CaiusDrewart · 1767 5/21/18
I'm thinking that it might work okay for Roland doing solo... even if Roland fails, the extra willpower will reduce how much he fails by. And in solo Roland may have less of a cash crunch. — FBones · 9517 10/6/18
This is probably obvious but I think that this card is better in TFA, given that the need to explore means that you'll often be triggering more treacheries (especially if you designate your Tooth of Eztli user to be the primary explorer). — iceysnowman · 129 2/24/20
unfortunately, this still isn't that good in TFA, I don't think. seems like you can't actually test out of most of the treacheries, still. it does make a decent place holder if you're building a deck around Elli Horowitz. that sort of deck is also more scared of Crypt Chill. Ursula is also more afraid of Crypt Chill due to dependence on Fieldwork and Pathfinder. Perhaps less afraid of Frozen in Fear, though, with Pathfinder and her extra investigate action. — Zinjanthropus · 16 3/13/20
I will say, poison is very scary in TFA, but +1 probably isn't going to help you that much — Zinjanthropus · 16 3/13/20
1

I feel like this card might not get enough consideration in multiplayer games where a character is able to run cards like ["Let me handle this!"] and absorb other investigator's encounter cards. A lot of weaknesses are treachery cards, too.

Considering this can only fire once a turn, it's probably not all that great. But if your group is drawing 3 or 4 encounter cards a turn, according to the review below, 30%+ of cards have skill tests on them so you should be drawing a skill test every turn. So, if you're able to control who gets what card each turn, you can (kind of) be sure you're going to draw a card each turn.

zovc · 16
I get where you're coming from, but three bucks and an action for a card that doesn't help me kill monsters is a really hard sell, especially as the player count goes up. I think you're better off saving let me handle this for when your seeker draws an elite, and just manipulating encounter draws to give yourself damage and your allies horror, tooth or no. It just doesn't quite get there for me, from a guardian perspective. — SGPrometheus · 224 3/23/20
Perhaps if you trigger this more often it would be more valuable but this is a card that straddles the just good enough line since it has a restricted use and 3R cost. I keep using in Ursula since there are not that many L0 relics and the accessory slot isn't that contested in Seeker (Grisly Totem is pretty good though). It feels like it became more valuable in TFA though since I think the % of agility treacheries goes up and you have to Explore often. Right now since there is so much XP in TFA I am running it with Crystalline Elder Sign and Relic Hunter. Ursula is attempting to be immune to the encounter deck if she can get the Bow into play. 2 (or more...) scenarios left. — TWWaterfalls · 452 3/24/20