Prophesiae Profana
Atlas of the Unknowable

While you are not at the locus, you get +1 , +1 , and you may ignore attacks of opportunity.

: Move any investigator to the locus.

This card's constant ability now reads: “...you get +1 , +1 , and ignore the first attack of opportunity you take each turn.” 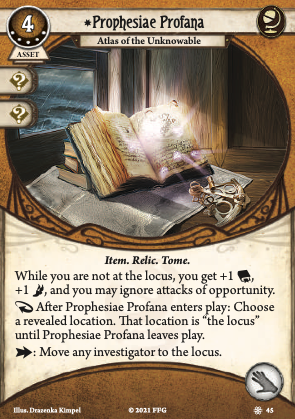 Having played with this card a few times personally, and with my party, I think all the talk of taboo and brokenness is pretty overblown (at least outside of solo). It does absolutely smash certain scenarios, like Doom of the Eztli mentioned below, but I generally think this card is in line or slightly above the power level for a 5 exp card in a heavily contested slot. It's expensive in both regards as well as resources, so it has to be worth running, and in that regard it is a very cool card. In terms of the stat boosts, they're of course great, but nothing you couldn't get in other places with other cards (and only Monterey and Ursula really care about the agility boost). The movement is cool, but it costs actions, and Seeker actions arguably the most valuable in the game (notice a lot of the taboo'd seeker cards have fast effects). In my personal experiences, other than in the aforementioned DotE, I hardly ever used the movement option (though maybe Daisy would more often since she gets it for free). The most powerful aspect of this card is probably the part that ignores attacks of opportunity. This is a godsend for solo seekers who have no ally to take out foes for them, but in multiplayer I don't think this actually changes that much for a seeker, other than being able to potentially drag enemies to their fighters (and even then they'd have to end their turns there). In my personal experience in 4 player games, the seeker has dodged one, maybe two attacks of opportunity per game on average, which isn't trivial but isn't enough of an impact to where I'd call it broken. You could say it's the sum of all these effects that makes it deserve a taboo, but personally I think 5 exp, 4 resources and a hand slot really demands a lot from a card (see cards such as Lightning Gun) and that Prophesiae deserves to be cool and high impact. It does really well in a few scenarios, but I think that's ok, with the sheer variety of scenarios in this game some cards are bound to break some. I've never seen it break a campaign anywhere near as hard as any of the taboo'd seeker cards, or even some of its contemporary seeker cards like Eon Chart. This was revealed the same day as Jeremiah Kirby and I think he's ended up the better card with a really cool deckbuilding puzzle. At the end of the day, 4 resources, a hand slot and 5 exp are a lot for one card (10 for two copies) so it should be powerful. But I don't think it's anywhere near the power level of what we've seen before for seekers. In defense of Prophesiae Profana, I rest my case.

sonicknight15 · 61
It's really campaign dependent; aside from Etzli, the movement ability isn't that useful for Forgotten Age. It was great with Monterey Jack in Edge of the Earth however. MJ has access to so many extra action cards that spending actions to move Lily to a critical location was never a problem for him. But many EotE scenarios cater to PP's strengths and I agree it shouldn't be taboo'ed. And for those saying it breaks Etzli, House, etc—so does Open Gate and that's a Level 0 card. — MindControlMouse · 14 3/31/22
6

You are playing The Forgotten Age, got 5 exp in first scenario. Then, you buy this card.

Hard mulligan to get it. When you got it, make the entrance The Locus. It means u have this efect until the end of scenario. When you will get the Relic, give it to other player, move him to entrance, win.

There is a lot of other scenarios that can work with it. Cassino with Peter Clover, Theater in Carcossa, and every scenario with resigning.

Works incredibly well with Library Docent to switch from 1 go to location to another.

Daisy Walker can move a 4 player team to the locus in 1 turn.

No attacks of opportunity means lecturing stuff to monsters. Engaged monsters move with you. Hello helpy guardian friend, I brought a monster with me.

GrueneLupenAufheben · 87
I don't understand your first sentence. "Library Docent" requires to play a different Tome by title. So you can't pick up one copy of this card and play the second to name a different locus. Or did you mean something else? — Susumu · 234 9/18/21
I think he want play the book afterwards and choose to choose a new location for the locus — Tharzax · 1 9/20/21
@Tharax: Correct — GrueneLupenAufheben · 87 10/5/21
0

This card has a cool interaction with Gene Beauregard. You can freely move to locations and move enemies off of you to a convenient spot. It's a very expensive combination in terms of slots, resources, and XP. However, it gives you tremendous, testless protection against enemies.

I too think it's broken. I assume we will see it on the next taboo list.

No one has mentioned it yet but it seems also interesting against massive enemies: they CAN perform attacks of opportunity but CAN'T follow you when you leave their location, right ? Which means this card allow you to go through a massive enemy's location without consequences. It's quite niche but fun to realise.

If you have the possibility to influence the construction of both decks of your team (2-handed solo or an agreement with your friend), you can make a [good seeker] + Trish duo for this combo:

You now have a 6 intel and 6 agility Trish who can play investigate / discover clue actions in locations with enemies without triggering the AoOs (and so getting a second clue once per round each time instead of automatically evading the enemy) and who can then move out of the location and use Gené to send the enemy back.

P.S.: is there a way to make the fight/intel/... symbols ? I thought but can't remember it.

AlexP · 218
So a 8xp, 4 card, 9-11 cost combo combo to slightly beat Obfuscation, Handcuffs or Narrow Escape? Too Broken! — MrGoldbee · 1297 12/12/21
I think the card by itself is too powerful now, even before the combo. Regarding the combo, 1 card (Research librarian) isn't mandatory and the 2 that cost XP (Prophesiae profana et Gené Beauregard) are good by themselves so can be used before the combo is finished, to investigate better and to teleport players. And finally the number of cards and the total XP is divided between 2 decks: 2 cards and 5 XP in a seeker deck, and 2 cards and 3 XP in a rogue deck. — AlexP · 218 12/12/21
I agree with MrGoldbee here: Its a 5 cost card that is giving you a VERY specific effect that while potentially very useful for some scenarios isn't going to generally break the game. The specific combo you made isn't just a 8 XP, 4 card, 9-11 cost combo, it is also a combo two players have to build around, which isn't really going to ever happen and costs you such an absurd amount in terms of opportunity cost of both investigators (assuming we are talking two hand solo and the bad feels of one player being the other's combo engine aren't in play, even) that you are almost certainly better off just... doing things normally. There are already pretty trivial ways to turn resources and XP into very safe (Higher Education+Guiding Stones, for example, will let you casually scoop up an entire location's worth of clues whenever you want) that don't involve this much effort, and ways for seekers (and especially Trish) to trivialize enemies and to hit 6 evade-6 investigate. While I am a huge fan of jank combos, the jank combos need to achieve something you otherwise are not capable of or create novel scenarios, and this combo just doesn't do that. — dezzmont · 148 12/13/21
As for your last question, AlexP; try writing a dollar sign. That will bring up a meny aka the # one, just for icons and symbols. PS: Doesn't work for comments, just for reviews and deck building notes. — olahren · 2337 12/14/21
I agree this is too strong. Even without combos, it basically allow seekers to investigate in god mode throughout the game. — liwl0115 · 34 12/14/21