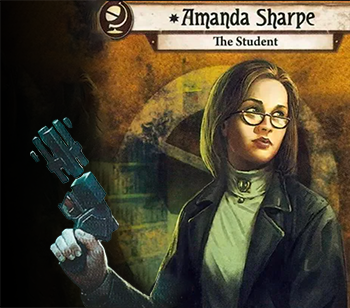 TLDR: Based on kinzuuu's Red-Handed Amanda Deck we're going to draw half our deck every turn with a ton of soak. Instead of focusing con clues, we're our team's dedicated fighter

This deck guide is a variant of kinzuuu's The Red-Gloved Man Amanda Sharpe build. The original is completely busted, even with the latest taboo. This version takes that concept and goes from a dedicated cluever to one of the most consistent fighters around. Using Amanda's forced ability we can super charge our card draw and compress our actions to efficiently deal with threats.

We abuse how good off-color Practiced skills are with to hunt monsters far larger or numerous than most dedicated fighters. One area we discovered was a potential weakness was consistent multi-damage. Since Brute Force is not Practiced, our only skill that buffs damage is Vicious Blow. Having only 2 in the deck meant that at most we have 2 turns of 2 damage per attack which wouldn't get the job done. Enter Hyperphysical Shotcaster. This jack-of-all-trades comes to us from the Scarlet Keys expansion and it opens up the ability to fight with the best. It is a firearm weapon like any other (worth taking) that deals +1 damage. More importantly it offers 2 unique upsides compared to most other firearms. First, it is neutral which allows to take it. Second, it discards itself when out of ammo (aether). Having shuffle back in every time we cycle through our deck. We then get to replay it and have access to 4 fresh shots. It does require starting with In the Thick of It of it to have access to ☑☑ Railshooter on our Hyperphysical Shotcaster, but we then get to start with 1 Unrelenting.

Just like kinzuu's deck, our main goal is abusing high-powered skills like Unrelenting, Overpower, Vicious Blow, and Momentum with Amanda's forced ability. Pairing assets Dream-Enhancing Serum and The Red-Gloved Man with events like Cryptic Research and Cryptic Writings we aim to easily pass test and cycle through our deck many times a scenario.

Similar again to kinzuu's deck, we don't even need The Red-Gloved Man to work. The number of skill icons our skills lets us pass most tests. What The Red-Gloved Man gives us is an insane amount of 4/4 soak (that is constantly being replayed).

Luxury Upgrades (in no particular order)

We want to churn through our deck as fast as possible and get our key assets into play. Hyperphysical Shotcaster needs to be out for consistent damage unless you have Vicious Blow at hand. Dream-Enhancing Serum or Scroll of Secrets gives us further boosts to our card draw.

From here we play every Laboratory Assistant and Cryptic Research (or commit Unrelenting) to fill our hand, netting us Overpowers, Fighting Lessons, Promise of Powers, and Vicious Blows to spend on taking down bad guys. The Red-Gloved Man can sub in for / enhance any of those. We use Shortcut to efficiently engage enemies and can use Obscure Studies to buyback a key other skill to reuse again next turn.

kinzuuu designed their version for 3 player Hard Campaigns. Similarly, there is no reason this cannot follow suit as it has been very good in multiplayer.

With a couple tweakings (Perception, Deduction) it can easily flex into a true solo run as well.

Can carry the load for killing monsters

Whispers from the Deep

Basic Weakness that kills us

Thank you kinzuuu for your deck. Check it out (link at the top). Amanda quickly became one of my favorite investigators to play after playing your deck. My group just came off a run with the new Scarlet Keys investigators and are doing an all Seeker run. Since we just saw Vincent Lee be our fighter for that campaign we wanted to mix it up a bit. After tinkering with Joe Diamond and not being satisfied with his options we switched focus to Amanda and it has exceeded our expectations. If you love drawing cards and test with "NUMBER GO BIG" some variation of this or kinzuuu's deck are for you.

Compare with another decklist